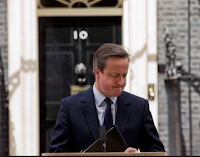 To coincide with the launch of memoirs next year, the BBC is working with David Cameron on a multi-part documentary about his premiership.

It will be produced by veteran documentary maker Denys Blakeway.

Matthew Moore, the Times reporter who broke the news, has been taken aback by some of the reaction:

The sort of thing he means (much more mildly put than a lot of it) is this from ex-BBC-reporter-turned-far-left-Labour MP Clive Lewis:

"The sooner the BBC is democratised the better" isn't remotely sinister, is it? And it comes from a man who has previously admitted, or rather boasted about, presenting deliberately biased reports while working at BBC Look East:

“I was able to use bias in my reports by giving less time to one than the other.
“I reported on both but the angle and words and the language I used — I know the pictures I used — I was able to project my own particular political positions on things in a very subtle way.”

I don't think his 'democratisation' process will have political fairness as its top priority.
Posted by Craig at 17:46