For example - coming up shortly. Stay with us (as they say on the BBC News Channel) - here's self-declared communist Ash Sarkar:...

...(despite Communism killing over 100 million people over the previous century - a statistic that speaks of over one hundred million individual tragedies.

To be fair, I suspect she really wouldn't enjoy dying that many times, even for the Corbyn cause).

So, you may ask, who's this Ash? Well, she's a new regular on the BBC from the extreme alt-left website Norovirus.Media: 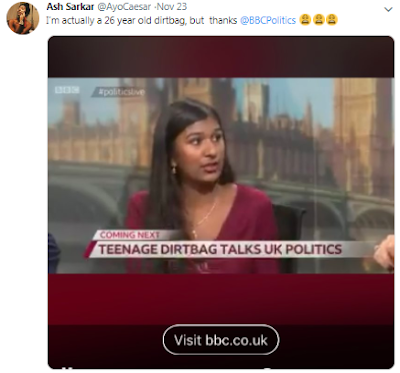 Oddly, I've not seen the likes of Samira Ahmed protesting furiously about such a fringe extremist being 'normalised' by the BBC.

As you'll all doubtless be well aware, the whole hilarious mess-up arose here because the lead singer from Wheatus - who, m'lud, I'm informed by my learned friend, Mr Rees-Mogg QC, had a hit in 2000, rather charmingly, one thinks, entitled Teenage Dirtbag (though a dirtbag, I'm informed, is not a superior brand of vacuum cleaner) - was up next.

And that banner just happened to appear above the face of Norovirus's early-middle-aged, extreme-left, communist, BBC regular Ash.

How we all laughed.

I, being a fan of free speech, am glad that Ash seems to have become 'Our Ash' at the BBC. There's nothing nicer than listening to barely-thinking apologists for the most mass-murderous ideology in human history chewing the cud on BBC politics programmes, being glamorous and getting away with it because they're (fairly) young, female, BAME and (very) left-wing.

Ticks, ticks and ticks for the BBC, no doubt.

What though if you're white, working class, non-racist, male, not glamorous, hard-to-place politically, but - to the annoyance of 'them' - not keen on Islam or heavy levels of disruptive mass migration?

Do you get a regular spot on the BBC?

You really, really don't - despite you not supporting any murderous 20th Century ideologies.