Add an extra streak of bacon, another egg, one more sausage, a second hash brown, an optional mushroom, a black pudding (obviously - and such a thing should be on your place in the first place, regardless), though feel free, with my blessing, to skip the extra fried tomato (I hate tomatoes, even fried ones), because, yes, oh yes, rejoice, rejoice!, there's an elongated Andrew Marr show tomorrow.

And don't deliberately sleep in to avoid it either, or you'll disappoint Rob: 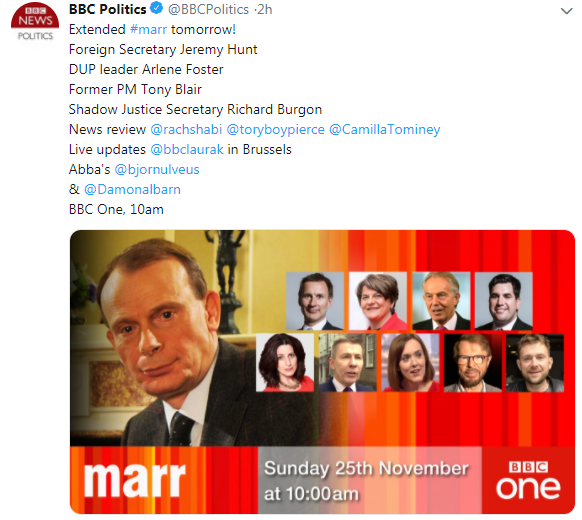 Hmm, what to make of that, O fellow bias watchers?

Well, for starters, it looks as if there's Bjorn from Abba, but where's Benny? #bbcantiBennybias.

And, worse, why neither of the Abba women? #bbcmisogyny

That's a reasonable spread: four right-leaning; four left-leaning (though two of them far-left, none of them far-right); some pro-Brexit, some anti-Brexit.

(What's with the two far-left guests though, eh?)

Who will Andrew insult this week though?

Fingers crossed for Rachel or Richard. Tony has the hide of an armed-plated rhinoceros hiding in a tank, so nothing will bother him. And Andrew is only ever bothered about Iraq when it comes to bothering Tony.
Posted by Craig at 20:04