Viewers of This Week who, after quaffing down bucketfuls of Blue Nun, stayed to the end (someone in the early hours of the following day) were rewarded by Andrew Neil's parting shot:

That's your lot tonight FOLKS but not for us. We're off to Loulou's to celebrate the worst year ever. Some misguided historians are claiming 536 AD was the worst ever. But they're too mollycoddled in their ivory towers to appreciate that 2018 has been much worse. Yes, 536 had a volcanic eruption, spewing out ash that blocked out the sun and blighted crops. But in 2018 we've had endless Maybot Brexit statements, blocking out reason and the will to live. Plus non-stop, never-ending, mind numbing Brexit coverage in the media. Give me a volcanic eruption any day. And yes the sixth century was somewhat discombobulated by rampant and deadly bubonic plague. But we live in constant risk of Adonis-Campbell-Grayling Brexit syndrome, which is not only fatal but for which there is no known cure. So you can understand why 536 has nothing on 2018 and why we're dedicated to drowning our sorrows. Put it down to our deep sense of public service. Nighty night, don't let the Turkeys bite.

Guess what happened next. Oh yes...

A C Grayling: Apparently Andrew Neil on the BBC compared Andrew Adonis, Alistair Campbell and me to the bubonic plague. Thanks for the endorsement, Brillo; now we’re certain we’re doing the right thing. #PeoplesVote

Lord Adonis: In which ⁦Andrew Neil likens me to the bubonic plague. This is even better than Farage calling me a ‘twisting weasel’ - & my twitter biog will be updated - but isn’t it, ahem, a breach of the BBC’s duty of impartiality? 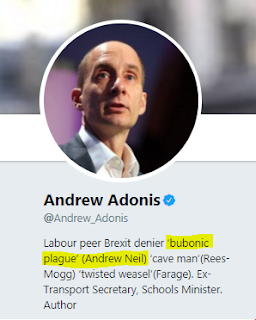