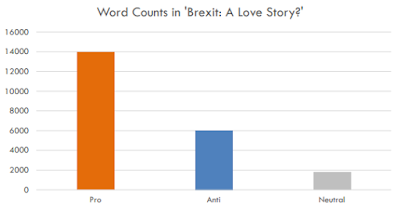 As you may have noticed, there's been a bit of news day. And it's still going on.

Meanwhile, taking a longer view, and working over months rather than minutes, David and Andrew at News-watch have been very busy surveying another BBC series about Brexit - namely Mark Mardell's  Radio 4 Brexit: A Love Story.

We dipped into it (posting about three of its episodes) and found it severely wanting impartiality-wise. But David and Andrew have gone beyond mere dipping and have devoutly drenched themselves in the entirety of the thing.

The stats speak again. This was a series that, statistically-speaking, was sharply biased against pro-Brexit points of view. And the word count has shown what a simple count of the allegiances of the contributors could only hint at:


Although there was only a slight numeric advantage in favour of ‘pro’ EU/EEC contributors, those speakers delivered 64 per cent (13,392) of the words spoken, against 28 per cent (6,009 words) from the ‘antis’, a ratio of 9:4. In addition, of the top 10 contributors by running length, eight were ‘pros’ and only two were ‘anti’. Strong Europhiles such as Tony Blair, Nick Clegg and Sir Stephen Wall had much more space to advance their ‘pro’ opinions than those who were negative about ‘Europe’.

And that's only for starters: Only six speakers of the 121 contributors who appeared in the series as a whole "made what could be called substantive points against the EU".

The whole series struck me as being a 'masterclass' from the mighty Mark Mardell in how to appear to be impartial whilst being anything but.

It may therefore, perhaps, be taken as a template for BBC reporting as a whole on certain subjects.
Posted by Craig at 19:24