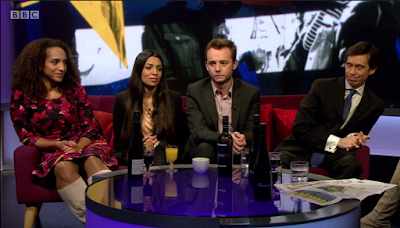 Last night's Newsnight interviewed Conservative MP Rory Stewart, Eleanor Penny of the far-left Novara News, philosophy professor Quassim Cassam, Chris Curtis of YouGov, Afua Hirsch of The Guardian, and Labour candidate Faiza Shaheen of CLASS. Breaking those names down into statistics, we had (1) one centre-right-winger, three left-wingers, a Kantian philosopher and a pollster, (2) three women, three men, (3) three BAME guests, three non-BAME guests, and - most importantly from the point of this blog (4) not one guest who voted for Brexit in 2016 (until the YouGov guy did, which seems unlikely). Yes, Rory Stewart and Afua Hirsch oppose a so-called People's Vote and talk of honouring the result of the 2016 vote, but wouldn't it have been better, impartiality-wise, for Newsnight to have had at least one guest who's been a committed Brexiter from the very start?
Posted by Craig at 10:56