Viktor and George and Evan and Kevin

Continuing with last night's PM, here are Evan Davis and Kevin Connolly on Hungary's Viktor Orban. Look out for Evan's introductory remarks about George Soros, and savour the irony (perhaps) of a report about the threat to democracy in Hungary which features voices from just one side of the political divide there: 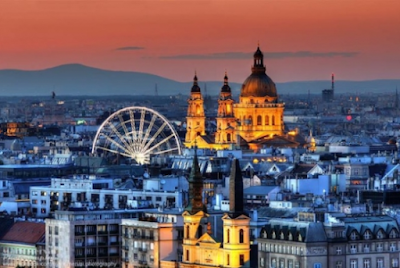 Evan Davis: George Soros is a wealthy and powerful advocate of liberal causes in the modern world. He uses his huge private fortune to promote the cause of greater openness and, somehow, he's emerged as a peculiarly intense focus of hate from right-wing campaigners, who have even been blaming him for funding the caravan of migrants making their way through Mexico from Central America to the US. But nowhere is he more controversial than in his home country Hungary, where a liberal arts university he founded says it's on the point of being forced out of business by the populist-nationalist government of prime minister Viktor Orban. Mr. Orban's critics say he's shown a pattern of trying to crush or control institution he doesn't like, including Hungary's independent judiciary. Here's the second in a series of special reports from Budapest by our Europe correspondent Kevin Connolly:
Kevin Connolly: We're on a huge Ferris wheel in the heart of Budapest which offers a spectacular perspective on the landscape of Viktor Orban's Hungary. Architecturally, it is impossible not to be charmed. The glittering Danube threads together the city's elegant parks and palaces. But somewhere down there, in the courtroom and colleges, there are growing fears that Viktor Orbán's instincts are authoritarian and that, slowly, he's moving to erode academic freedom and the independence of the judiciary and, above all, to force his least favourite seat of learning out of town altogether.

Eva Fodor: The government has forced us out of this country. It's this simple. It's very obvious that it's designed to make our lives impossible.

Eva Fodor is pro-rector of the Central European University, a graduate college established in Budapest by the Hungarian-born financier George Soros. His liberal globalist instincts seem to really rile Viktor Orban. Eva says the University is being forced to relocate to Austria next month because the Orban government won't sign the papers that would give it the legal authority to operate in Hungary.

Eva Fodor: This is an obvious and clear violation of the principle of the rule of law. The government passes ad hoc regulations without consulting people. This is an obvious and blatant restriction on academic freedom. It's actually closing a university. So this government, the Hungarian government, has designed the legislation that closes a university. This has not happened within the European Union, so it is a purely authoritarian move.

The Central European University can. to a certain extent, look after itself of course. Its students can take to the streets to denounce Viktor Orban's authoritarianism. as they did here. And, in the end, George Soros can afford to fund the move to Vienna, even if he doesn't really want to . But what of the judiciary, which feels itself to be under a similar kind of attack? Hungary's government is taking control of judicial appointments and lowering the compulsory retiring age for experienced judges to create more vacancies for its own people. Zsuzsa Sandor was forced out of her job as a judge under the new rules and says Viktor Orban's Fidesz party is putting the legal system under more pressure than the Communists did back in their day. Mrs Sandor says this is all about Viktor Orban wanting to control every area of life in a way that is just not compatible with proper democracy. Already, she says, prosecutions against Fidesz people only go ahead if the courts get the nod from someone at the very top of the party. Now, of course, no one is saying that Hungary is heading back into the kind of political darkness remembered here at the Terror House Museum, which commemorate victims of the Nazis and the Soviets. Indeed, Mr. Orban's defenders say all the complaints from academics and lawyers are just the predictable moaning of liberals who simply don't like him. But there is surely something more profound at work here. Hungary only emerged 30 years ago from a largely non-democratic history that included occupation by the Austrians, the Germans and the Russians. Small wonder, says the academic George Baron (sp?), that there's a taste for strong leadership here - a taste that brings with it certain dangers.

The views from Budapest's Ferris wheel are breathtaking and the Budapest the tourists see is as beautiful as ever, but below the surface this is a troubled landscape, and there are real fears here the Fidesz government is eroding the strength and freedom of civil society in a manner that is disturbing and that is not pretty to watch.
Posted by Craig at 12:35