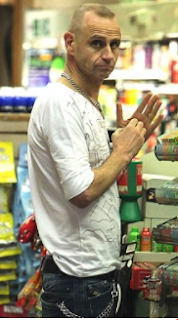 (In honour of the latest manipulative John Lewis advert...
Evan, this one's for you.
And you can tell everybody.)

Well, I put my arm bands on and took the plunge tonight, and decided to give Evan Davis's new-look travelling-show version of PM a listen.

(As a blogger about BBC bias, I'm not one of those who can easily hide from such things.)

I managed the opening Brexit-focused quarter of an hour and then climbed out, shivering and grasping for the gift of someone's (maybe David Furnish's?) towel.

Given what you've already said in the comments, I had a strong feeling inside that there would be some biased editorialising from Evan worthy of blogging about, but this wasn't just 'some' editorialising; it was full-on, hardcore editorialising, replete with staggeringly biased language (and metaphorical feather trim and flamboyant glasses).

It's a little bit funny but, as a blogger, it seriously made me groan. So, excuse me, and I hope you don't mind, but I'm about to moan (as it made me quite cross):

Should I spend an hour transcribing the whole thing to put down in words its bias for posterity? Or should I just put myself through a few minutes of less-than-pleasurable re-listening in order to quote only its most biased highlights (of which I registered several)?

And then came the interview with a Tory minister, broadly reinforcing Evan's editorial, with help from Evan's biased questions.

And then came the very end of that interview, when the previously obliging minister refused to oblige Evan over a different point.

Well, Evan took the 'then again, no' approach, and (literally) laughed at him, and put him straight, and then told him they'd run out of time, and then moved straight on without giving him a chance to utter even so much as a grump of objection - a classic 'getting-in-the-last-word' kind of point-scoring behaviour that's my own pet hate when it comes to BBC political interviews - a kind of behaviour Evan Davis is particularly prone to.

I know some of you (unlike me) didn't take to Eddie Mair (my favourite ex-Radio 4 political presenter), but this was just so atrociously opinionated and bad that even the most ardent Eddie-haters must surely be longing for his return if this is what Radio 4 listeners are going to have to put up with from now on.

Maybe I'll transcribe the whole thing tomorrow. I know it's not much, but it's the best I can do. And if I do, it's for people like you who keep it turned on. After all, you have the sweetest eyes I've ever seen...


Apologies for the Elton John-themed nature of this post, but it's midweek and I've been exposed to This Song all flipping day.
Posted by Craig at 22:40