Had you heard of this? 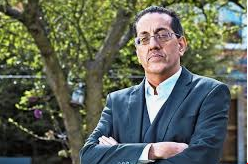 Looking through my Twitter feed this morning I saw a link from Harriet Sergeant to an AltNewsMedia article that quoted part of an interview on Radio 4's PM back on 19 October.

As Harriet says, it contains an "explosive" claim from former Chief Crown Prosecutor in the North-West of England Nazir Afzal.

To set the quote in context I'll transcribe the whole first half of the interview:

Carolyn Quinn: Nazir Afzal is former Chief Crown Prosecutor in the North-West of England. He was the main prosecutor in the case against the Rochdale grooming gang in 2012. And Nazir Afzal, you hear the case here. We heard from the local MP listing the towns and cities that have experienced similar cases. How do you respond?
Nazir Afzal: Good afternoon Carolyn. I think there's about 20 now, 20 towns and cities that have had this type of model of street grooming prosecuted. And it is sadly no surprise. I suppose there is one silver lining, namely the fact that these individuals are now being prosecuted. We've now got, I think, more than 200 men have now been prosecuted over the last 5-7 years for this type of behaviour. But the reality, of course, is that this has been going on for perhaps two decades, and so we're now having a reckoning in effect. And in large part it is about the failure of authorities, it is the failure of all agencies, all agencies, to not listen to what these young girls invariably were going through And, yes, we've learned...They all keep talking about learning lessons, and the reality of course is they should have got it right first time. And the only person that knew they weren't going to be listened to was the perpetrator, the offender, and he knew that and, therefore, he was able to carry on abusing them in the way that he did.
Carolyn Quinn: And in the meantime these vulnerable and brave young women suffered and tried to give evidence about the wider issue. These girls were calling out this behaviour for a long time for anything was done.
Nazir Afzal: Absolutely Carolyn. If you think about it, you may know this, but back in 2008 the Home Office sent a circular to all police forces in the country saying "as far as these young girls who are being exploited in towns and cities, we believe that they've made an informed choice about their sexual behaviour and, therefore, it's not for you police officers to get involved in". That's the landscape coming from the top down in 2008. Rest assured, all agencies are going to listen to it. It only changed because of the work we did and the work the Times newspaper did in 2010-11. The fact that we were able to bring the prosecution in Rochdale led to this investigation in West Yorkshire opening...it  only opened in 2013. And the series of prosecutions that have followed indicate to me that the agencies are getting it right now but the reality, of course, is that we've lost a generation of young girls who have been left behind and abused.

So if Mr Afzal, who knows as much about this as anyone, is correct, then why hasn't this been picked up on by mainstream journalists? Why didn't this PM interview spark a nationwide clamour to investigate that 2008 Home Office circular, and the behaviour of the Home Office under Gordon Brown's government? Surely, if, as Mr Afzal alleges, it played a part in keeping the grooming gangs operating with impunity for a few years more then it's a massive scandal, isn't it?
Posted by Craig at 09:29