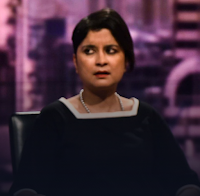 And Andrew Marr got it in the neck for his "Don't try and patronise me" outburst at Shami Chakrabarti on last Sunday's Andrew Marr show. Apparently "many" people had objected to his behaviour. Including Patrick Edwards:

I think she was going to go on to explain that as a democrat she accepted the will of the people and would therefore support Britain leaving the EU. Before she could say all of this, Andrew Marr interrupted her saying, "don't patronise me, I'm as much of a democrat as you are". He said it in such an aggressive tone, I was shocked. You could see Baroness Chakrabarti was really taken aback too but, somehow, she recovered her composure and the interview carried on. My feeling is that Marr would never have spoken to her in this way if she'd been a man. Any man would have punched him or walked off the set. Hopefully, Andrew will reflect that he went too far and apologise for his outburst on this Sunday's show. In this era of #MeToo and calls for gender equality, I think he was way offbeam.

Now, I have to say that though I'm a man I would not have punched him or walked off the set, despite Patrick's confident assertion that "any man" would have done such things.

Still, will there be an apology? Well, Samira said "there was no apology from BBC News when we asked them for their response". (Well, blow me down with a wren's feather!)

This was the BBC's statement (short and not-so-sweet I'd say!):