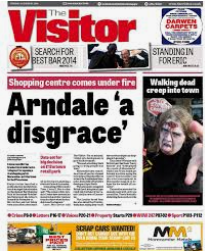 People are noting that it publishes such mighty local names as The Yorkshire Post and The Scotsman and The i, but it actually has over 200 titles to its name, including the mightiest local names of all, namely the Morecambe Visitor and the Lancaster Guardian (the former widely regarded by me as the UK's finest local newspaper).

I doubt we'll be hearing much about this from the BBC, but Media Guido is surely bang on the mark in saying, "And the BBC is now the nation’s biggest publisher of local news via online. Undermining the viability of independent commercial local news".

Other people have been saying this for years.
Posted by Craig at 11:14