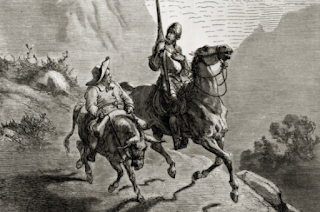 Brandishing their simple swords of truth, the trusty BBC is donning armour and riding forth against fake news.

For yes, the BBC is launching Beyond Fake News.

And it's a global crusade too (not that they'd put it like that, of course). The season is aimed at Europe, the Americas, Africa, India and Asia Pacific.

The countries specifically mentioned so far are India, Kenya, Somalia, Russia and the Philippines.

Jamie Angus, supreme leader of the BBC's World Service Group, says the BBC must “move beyond just talking about the global ‘fake news’ threat, and take concrete steps to address it”.

And his first step will be to abolish BBC News.

“Poor standards of global media literacy, and the ease with which malicious content can spread unchecked on digital platforms mean there’s never been a greater need for trustworthy news providers to take proactive steps.

“We have put our money where our mouth is and invested in real action on the ground in India and in Africa.

“From funding in-depth research into sharing behaviours online, to rolling out media literacy workshops globally, and by pledging to bring BBC Reality Check to some of the world’s most important upcoming elections, this year we’re carving our path as a leading global voice for spotting the problems, and setting out ambitious solutions.”