The man who's meant to report the news 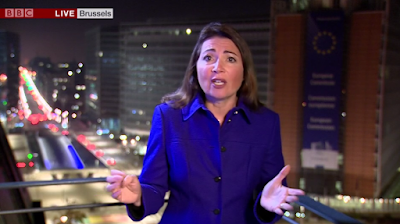 'BREXIT TURMOIL' was the caption used throughout yesterday by the BBC News Channel, and the rows at Westminster around Brexit dominated the opening of last night's BBC One News at Ten.

Afterwards, the programme moved on to its second big story (a related one): a report from Northern Ireland about post-Brexit threats to security at the border with the Irish Republic.

This was framed as being a Northern Irish police chief rejecting (Brexiter) claims that such concerns are being exaggerated. From what I saw of the one-sided report (from Chris Page), the BBC appears to have interviewed a Northern Irish police chief and asked him a leading question about that subject and then made his reply their No.2 story. Accuse me of 'confirmation bias' if you will, but I saw 'a message' in that from the BBC.

(1) A private care company looking after disable people has got into trouble.
(2) The UN is claiming that levels of poverty in some of Britain's towns and cities are "a disgrace".
(3) The Californian wildfires.
(4) #MeToo-type claims of sexual assault against a Lib Dem peer, focused on an interview with his accuser.
(5) Welsh footballers losing an important match. And
(6) An American judge ordering the White House to give CNN's Jim Acosta his media pass back.

The UN story is interesting. If you watched this report (from Michael Buchanan) and particularly if you read the accompanying BBC News website report you might come away thinking that, despite the Government's rejection of his findings, no one else objected to the UN special rapporteur's condemnations here and that they appear to be factually-based. If you read, say, the Daily Telegraph's report though, however, you'll see a much broader spread of opinion and that the debate is open and ongoing. 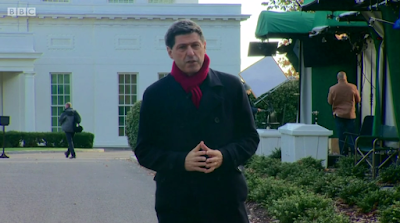 As for the final story, well, this was Jon Sopel's take:

It started as a bad-tempered exchange between an angry president and a provocative CNN correspondent, the temperature rising when the White House justified removing Acosta's hard pass, saying he'd laid hands on an intern and released an edited video that had been put out by a right-wing conspiracy theory-rich website - though when this was ridiculed, the White House changed tack, and said it was because he hadn't given back the microphone. This spat grew when the President threatened to take away the credentials of other journalists he thought were rude. CNN took legal action, and significantly, all the other broadcasters here joined in - including Fox News, normally a cheerleader for the President. This was now about press freedom. And today in court, it was Acosta 1 Trump 0. Today, Jim Acosta was able to return to the White House. In this topsy-turvy world, the man who's meant to report the news seemed to be enjoying being the news, while the President, who's never shied away from a fight, bemoaned the lack of decorum in White House news conferences. Jon Sopel, BBC News, Washington.