Giles Fraser on Asia Bibi and 'some people' 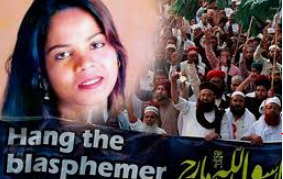 This morning's Thought For The Day came from the Rev. Dr. Giles Fraser (yes, him). It was a bit of a curate's egg, but the main point he was making is an interesting one and I thought I'd share it with you via a transcript:

In the last presidential election 81% of white evangelical Christians voted for Donald Trump and 16% for Hillary Clinton. And there's little reason to expect anything other than a similar level of support in today's mid-terms.

And the problem with the closeness of this association. reinforced by the media attention given over to American politics, it not that it isn't partially correct, because it clearly is, but rather that it doesn't speak anything like the whole truth about global Christianity. For whilst in some places Christianity may indeed be the religion of privilege and power, it's also the world's most persecuted faith.

Take the case of Asia Bibi, not a rich white American man but a former farm worker from the Punjab. In 2009 this Roman Catholic woman was arrested after an argument with co-workers who said that she was too dirty to drink from the same cup as them. The subsequent accusation against Bibi, which she denies, was she insulted the Prophet Muhammad. Bibi was charged with blasphemy and sentenced to death by hanging. Since 2010 she's been locked up, attacked by fellow prisoners and the object of an almost obsessive communal anger that demands her death. Last week the Supreme Court of Pakistan overturned her conviction, declaring her innocent and free to go. Except she still isn't free to go because she's been banned from leaving the country and her life remains in constant danger.

Asia Bibi is just one example amongst many. From North Korea to China, from Iraq to Somalia, Christians the world over continue to be bombed and imprisoned, but it feels to me like this is not a cause that some people are instinctively comfortable getting behind, partly because of the historic association between Christianity and privilege.

Moreover, when Christianity is positioned on one side of a partisan political struggle, it's too easy for those on the other side to think that the persecution of Christians just isn't one of their issues.

For the story of a woman like Asia Bibi doesn't fit with the dominant narrative that Christianity is the religion of rich white men. And this could be why Bibi, and so many others like her, have been so shamefully ignored for far too long.