It's a little bit funny

This is a bit weird, maybe, on the Arron Banks getting bumped from Question Time' affair, but it's still quite funny...


David Dimbleby: Next Thursday we're going to be in Dulwich in south London. There we're going to be joined by a man who has been described as "the most influential public intellectual in the Western world" and equally as a "Professor of Piffle", the campaigner against political correctness Jordan Peterson. The week after we're in Milford Haven and, believe it or not, at the moment at any rate, Arron Banks is going to be on the panel! So that's...we'll see! No, we'll see! That's two...that's two weeks from now.

Meanwhile, here's Carole Cadwalladr on Twitter tonight gloating, without having checked her facts: 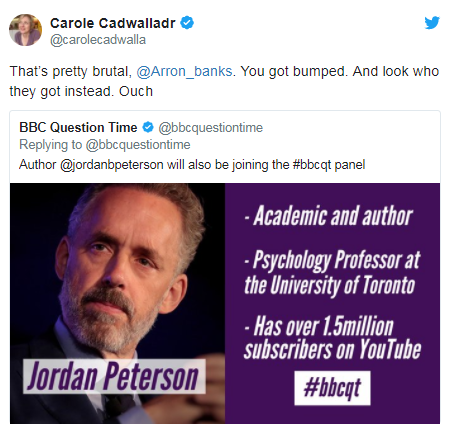 Wrong Carole. You got your weeks mixed up. Prof. Peterson was booked - and announced - for a week earlier than Arron Banks. Maybe you should have checked first. Ouch?

Give the women another Orwell Prize!

Update: Oooh, I've made it on Twitter. An "EU lawyer" reckons I must be a bot: