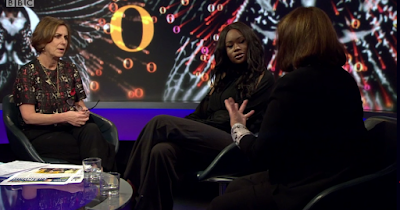 Last night there was (1) John Sweeney's latest nudge, nudge, wink, winking piece about Arron Banks, followed by an interview with an anti-Banks Labour MP; (2) an interview about JimAccossedHergate with an American journalist who really, really, really disapproves of what the White House did; (3) a piece on whether Amazon is a good or bad thing from a town oop north, (4) a discussion about whether the female orgasm should be included in school sex education classes (I kid thou not!), and (5) a Mirror journalist going Inside the Papers.

For stats fans, all five interviewees were female (if I'm allowed to say that, given what happened to Dame Jenni of Woman's Hour) - as, of course, was the interviewer (and the editor).

I'll pay credit to Kirsty Wark for not giving the pro-Acosta journalist anything like a free ride. (I'm guessing she'd read her colleague Emily Maitlis's piece beforehand). And David Grossman's Amazon report was both fair and interesting. But Kirsty's socially liberal feminism did seep out during the female orgasm discussion where she sided somewhat (though not too much) with the socially liberal young BAME woman against the socially conservative less young non-BAME woman.