There’s never been a fag paper between us. Updated

Diane Abbott spoke passionately, almost eloquently, on the Today Programme yesterday about the police’s somewhat confusing approach to hate speech and hate crime following Sara Thornton’s and Cressida Dick’s much-lauded announcement about the subject. ”Focus on violent crimes rather than misogyny.”   -  and, oddly “there’s never been a fag paper between us.”

When you’ve erased that image from your brain let’s consider what the much-maligned Diane was trying to explain.

At one point she defined 'hate crime', to John Humphrys’s obvious consternation, as “being shouted at in the street!”

“So police should divert resources - when somebody is shouted at in the street - when there might be somebody being stabbed around the corner?”  said Humph with exaggerated incredulity

“You know we live in an increasingly dangerous environment (sic) society and people feeling free to abuse people in the street and send them abusive emails and letters, that is part of that hatefulness and violence,” countered Abbott. You could see what she meant though.

But all that seemed somewhat at odds with Diane Abbott’s approach to antisemitism,  especially in the light of the story which occupied BBC News for one whole here-today-gone-tomorrow’s worth of headlines. 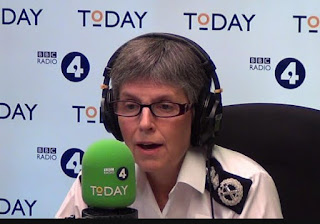 From a different political spectrum and to show that this blog is fair and open minded, I give you this from the New Statesman:
“If I’m rude to you for being black, you’d survive”: John Humphrys mansplains away hate speech to Diane Abbott.

Of course, I could person-splain my partially-sympathetic-to-Diane-Abbott position away with the ‘even a stopped clock’ manoeuvre, but I ‘m not going to do that right now.

Abbott is unarguably weird, inconsistent, hypocritical and, it seems, I’m afraid, ’unnecessarily’ antisemitic, but she wouldn’t have got where she is today without a particular type of verbal or mental agility/acuity.

Anyway, here, against Humph she shows resilience and tenacity; and then she (and the New Statesman) goes and spoils it all by forgetting something stupid like antisemitism in the Labour Party. (and her own cloth-eared nonsense about smearing Corbers.)
Posted by sue at 18:35