All the news that's fit to censor? (again)

Regular readers may recall the Case of the Missing 'Daily Mail' Front Page Headline in March this year: 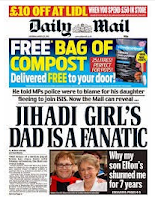 The BBC News Channel's nightly The Papers had failed to feature it during either of their discussions - and that was the prelude to the following day's Today programme completely ignoring the story too.

It was as if it were being deliberately censored.

Given the extensive coverage of the complaints made against the British authorities by the family of the three girls from London who went to Syria to join Isis, shouldn't the BBC have led the way in reporting the Daily Mail's scoop about the apparent extremist links of one of the girls' father, given its obvious relevance to the story?

BBC News is aware of the video material said to show Mr Hussen at a rally in 2012 and we have looked into the matter ourselves.

We didn’t consider it merited a report on its own, but it was included in a TV piece due to run on the evening of Friday, March 27th. Unfortunately, because of other news priorities, including the court verdict in the Amanda Knox/Meredith Kercher case, it didn’t make it to air.

However, it is something that we do intend to return to in the future.

Did they? Having done a Google search (using 'http://www.bbc.co.uk/news' and 'Abase Hussen' from 27 March onwards) I've found just one mention of the allegations against Mr Hussen on the BBC News website - a denial that either he or his daughter are extremists - buried near the bottom of an online paper review from 6 April (after The Times pursued the story):

In the Times, the father of one of the London schoolgirls thought to have travelled to Syria admits he attended a protest outside the American embassy, during which the crowd chanted the word "jihad".

But Abase Hussen insists he is not an extremist - and neither is his daughter.

(His daughter was the one who tweeted 'lol' after the massacre of British tourists in Tunisia).

All this comes back to mind because last night's The Papers on the BBC News Channel completely omitted another newspaper front page, despite showing those from the other newspapers twice.

This time, however, it was The Sun's front page that wasn't shown (on either News Channel discussion): 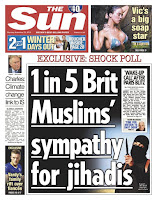 Again, it's hard not to see that as being some kind of deliberate censorship, is it?

(And that complaint would stand whatever you might think of the quality of The Sun's reporting here).

Update: Or maybe not. Come to think about it, last night's The Papers also ignored the Daily Express and The Independent. It's very unlikely that they were being deliberately censored. So mea culpa then. 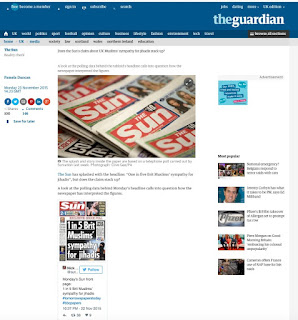 P.S. And we're being subjected to some very exciting breaking news; the BBC’s sensational discovery that London has always been multicultural.  Deep joy all round.  Fiona Bruce is delighted.
Posted by Craig at 18:01