For those of you who enjoy a transcription, here's an exchange from this morning's BBC Breakfast newspaper review, featuring Manchester University's Rob Ford (Matthew Goodwin's co-writer on Revolt on the Right). The BBC presenters on the sofa were Sally Nugent and Christian Fraser.


Sally Nugent: I love the next story that you've chosen here from The Independent on Sunday. We're heading to America for this one, aren't we...?
Rob Ford: Yes.
Sally Nugent: ...and the presidential race, which (laughing) just seems to just keep taking more and more bizarre turns?
Rob Ford: Well, this is next year's other big election race and this is an absolutely fascinating story. The current front runner on the Republican side is a complete political novice - a nationally famous neurosurgeon who operates on young kids' brains and saved the lives of kids who were completely written off, but he's never been a politician before and he's now leading the race. But what comes with front-runner status? Pressure, accountability, lots of people training their guns on you...
Christian Fraser: Scrutiny.
Rob Ford: Scrutiny, precisely. And he's finding the heat in the kitchen to be quite hard work. There's people sniping at him from all sides...
Christian Fraser: But the twist on this is (laughing) he's actually trying to make his past as bad as it possibly could have been. They're saying, "You weren't that bad".
Rob Ford: Exactly. His whole story is the classic American rags-to-riches story - grew up in inner-city Detroit, made good and now he's running for the presidency - and now they're saying, "Well, actually, your childhood doesn't seem to be, you know, perhaps not quite as bad as you were making out, so..."
Sally Nugent: So he said he had a tough childhood, or he... wasn't great?
Christian Fraser: Yes, there's some fairly lurid stuff in here...in there, isn't there? But then they're now trying to find the people in his past who could actually stand up what he's been saying.
Rob Ford: Yeah, yeah. And this is kind of a repeated tale in American presidential elections as new people appear on the stage. Then obviously every journalist in the country then says, "Well, we're going to go digging here and see what we can find" and there's always then this phase when there's these string of stories: "Is it or isn't it true? What's going on?"
Christian Fraser: They did this will Mitt Romney, didn't they? He'd been bullying someone in school and they went and found the person he'd bullied.
Rob Ford (laughing): But with Mitt Romney there was also this story of how he'd had a car elevator in his house..,
Sally Nugent: Yes!
Rob Ford: ...an elevator to lift his cars up and down (Christian Fraser laughs) in his three-storey garage.
Sally Nugent: It didn't help his prospects, did it? 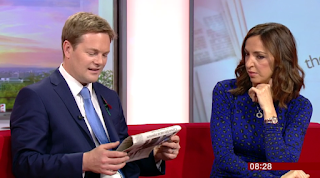 Two things strike me about that.

The first is that Christian Fraser immediately recalled another Republican contender, Mitt Romney, as an example of someone whose past came back to haunt him after the media went in search of dirt on him. Is that anti-Republican bias on his part or merely a reflection of the fact the the U.S. mainstream media, goes after Republicans much harder than it goes after Democrats (and that the BBC follows them)?

Whether it was against Mr Romney in 2012 or Sarah Palin (vice-presidentially hopeful) in 2008, Mr Obama never really got the same treatment from the mainstream media, did he, during either election? (He certainly didn't from our very own BBC).

The second thing is that the case around whether Ben Carson lied or whether it's part of the media that are lying about him is a very hotly-contested issue in the U.S. From what I've read even some left-liberal newspapers have seen critical of some of the reporting of Mr Carson by other parts of the media. Just because it says it in our own Independent on Sunday doesn't make it necessarily true either.