An Everyday story of Palestinian folk 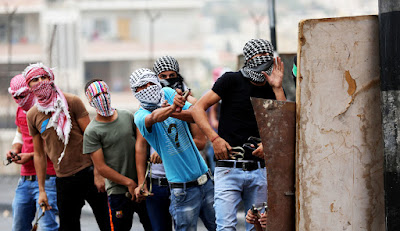 An article called “What Do Palestinians Want?” has been doing the rounds in a particular area of the blogosphere over the last couple of days. It was written by Daniel Polisar  a political scientist, and the provost and executive vice-president of Shalem College in Jerusalem.
I see him as (mainly) addressing an Israeli audience when he says:

“Absent almost entirely from this discussion has been any attempt to understand the perspective of everyday Palestinians. “

I’d venture that the perspective of everyday Palestinians is precisely what much of  the UK media, especially the BBC, is trying to portray.  That is how they view the situation and that is exclusively how they frame it. Consequently, the Palestinian perspective is the prism through which much of the everyday Briton views the Arab/Israeli situation.

From the famous plea by the BBC’s ex-kidnappee Alan Johnston “I’m telling your story,” to the empathetic reporting from Lyse Doucet and ‘gone native’ Yolande Knell, the BBC has striven to familiarise the British audience with what they see as the plight of the Palestinian people.

Daniel Polisar’s essay deals with “Arab public opinion in the West Bank and Gaza” particularly in the light of the latest spate of violence, variously described in the Western press as ‘lone wolf attacks’ or, at the other end of the spectrum, ‘a third intifada’.

“The consensus among informed scholars is therefore that the surveys are reliable, valid, and genuinely reflective of what Arab residents of the West Bank and Gaza think.”

Chapter 1.
What Palestinians think of Israel.
Not a lot.  They blame Israel for their internal political and economic problems. They think Israel deliberately seeks to target civilians. They think Israel is responsible for the Gaza wars. When given the option,  they blame Israel for matters it is obviously not responsible for, no matter how far-fetched, thus ascribing ‘greater power’ to Israel than it actually wields.

In fact, not only does this whole chapter describe what the Palestinians think of Israel, it also sets out with uncanny accuracy what the BBC thinks of Israel, even down to the insinuation that they believe that Israel will destroy al-Aksa and build a synagogue in its place. Even though the BBC is usually careful to include a disclaimer, it is always phrased to leave uncertainty.  ‘Israel claims this is not their intention’, never simply “it is not” Israel’s intention to alter the status quo at al-Aksa.

The next chapter is called:
What Palestinians think of Israelis and Jews.
The findings here are equally resonant. Many of the views expressed in that chapter appear to be shared by the BBC, and seem to run through every aspect of the BBC’s reporting as Palestinians’ attitudes are remarkably similar to the thinking that emerges ‘between the lines’ in BBC reports.
Palestinians “characterise Israelis as belligerent and untrustworthy but clever and strong, and finger Judaism as the most violent of all religions.”

I daresay the BBC may not see Judaism as a violent religion per se, but they do appear to believe that religious Jews are fanatics with bogus claims of rights to “Muslim land”. They certainly seem to see Israelis as belligerent (“swaggering” as Bowen said) untrustworthy and powerful, devious and disproportionately influential as stated in the first part of the sentence.
The denial of Jewish roots and historic connection to the region, questioning the legitimacy of Israel, expressing doubts about Israel’s continuing existence and so on are themes openly expressed or hinted at by speakers and experts that appear on the air.

“In sum, when the Palestinians look at Israel, they see a country of enormous power and influence that has done great harm to them, that seeks to displace them entirely from historical Palestine, and whose people are deficient as individuals and also lacking any collective rights to the land in general or to Jerusalem in particular.”

You tell me if the word "Palestinians "could not be replaced by “The BBC” and the sentiment remain as valid.

Chapter Three.
How Palestinians see Violence against Israelis.
Palestinians don’t see their own violence against Israelis as terrorism, and evidently, neither does the BBC. They do interpret “the 1994 killing of 29 Palestinians in Hebron by Baruch Goldstein as terrorism” and I daresay the BBC would not argue with that.
A small majority (59%) of Palestinians think suicide bombings and similar attacks are justified. I don’t know what percentage of the British public would agree, but the words of Cherie Blair and Jenny Tonge come to mind.
A majority of Palestinians see violence against Westerners as legitimate and effective. Here I’m not convinced that the BBC would agree 100%, but for example, some of Israel’s conciliatory actions, such as pulling out of the Gaza strip, are seen by the Palestinians as a sign of the success  of ‘armed resistance.’  The fact that Palestinian casualties are always, at the end of the day, numerically greater than Israel’s casualties is seen as a great injustice by the BBC. So maybe they too, see an admirable nobility in Palestinian ‘armed resistance.‘

The next part of this chapter is a little different. It asks:
Is violence praiseworthy?

The fact that the BBC never reports the extent to which Palestinian leadership glorifies and rewards its terrorists or shahids (martyrs) indicates that they find this aspect of Palestinian culture awkward and unpalatable.

Of course the omission from the front pages of the Palestinian leadership’s glorification and incitement is something people who support Israel are particularly incensed by because it gives credibility to the mistaken theory that frustration over Israel’s ‘oppression’ is the driving force behind  the violence, and shifts the blame from perpetrator to victim, while denying that antisemitism is behind the whole sorry situation.

The real answer to the question  What Do Palestinians Want? is a lot simpler than all this.

To some extent they’ve already got what they want. The leadership wants continual  jihad, to deflect attention from their own corruption and incompetence.
A ‘Palestinian state’ is not something Palestinians really want, nor is it something they are prepared for.  They do not want peace with Israel, and they never said they did. The armed resistance is aimed at the elimination of Israeli Jews from the region.

Should a Palestinian state ever be imposed upon the region by the well-intentioned Western world, all it would be good for as far as the Palestinian leadership is concerned is a stepping stone towards the elimination of Israel, which, after all is the openly declared Palestinian aspiration; and if they ever achieve such a thing, they would eventually realise that wasn’t what they really, really wanted after all. An Islamic Palestinian state? No Israel? Emptiness.

The West seems to believe that there’s a solution to this problem, but there is no neat solution in their terms. My conclusion is that all the opinions and findings in this research are valuable but incidental. They’re merely part and parcel of the above.

Chapters four and five are of great interest, if the message they elicit for the future is mainly one of hopelessness. It’s a long read, but do make the effort to read the essay, ‘cos you’re worth it.