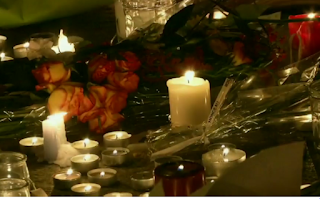 I see that the Sky News website has a lot more than the BBC News website this morning on the possibility that at least one of the Paris terrorists was a 'refugee' from Syria.

This is development that would, of course, if proven, confirm the fears of many that IS/al-Qaeda fighters to Europe under the cover of the 'refugee crisis' and the sympathy it has generated in some quarters.

The BBC's main article concentrates almost exclusively on the French-Algerian terrorist recently named. There is only one paragraph (near the end of the article) detailing with this other terrorist:

A Syrian passport, found near the body of one of the attackers at the Stade de France, had been used to travel through the Greek island of Leros last month, Greek officials have confirmed.

The equivalent article on the Sky News website, in contrast, devotes seven paragraphs to this aspect of the story, after its initial focus on the French-Algerian suspect:

Syrian and Egyptian passports were found near the bodies of two of the attackers, with Greek officials suggesting that two of the suspects may have arrived in the European Union through Greece in recent months.

Mr Molins confirmed a Syrian passport found at the site of one of the attacks belonged to a Syrian citizen born in 1990, but he was unknown to the security services. However, experts say it is possible the passports were faked or stolen from innocent people.

Serbia's Interior Ministry has said the holder of the passport crossed into Serbia on October 7, seeking asylum.

Tony Smith, a consultant on global border control, said it is extremely difficult for the EU to track people once they are in Europe because there are no internal borders.

He told Sky News: "The complexion of this group suggests that there have been some breaches of the external EU border, and there aren't any internal borders at the moment in Europe, so this is a very worrying development.

"What should happen is a very thorough identification and screening process at the first point entry but the sheer numbers - with a four-fold increase in migrants entering the EU irregularly in the first 10 months of this year over last year, which was a record number -  means it is extremely difficult for border agencies, in places like Greece and Italy, to do all of those checks.

"Once people are on shore then they are free to roam around the Schengen group without further challenge."

Is the BBC website playing down this aspect of the story? 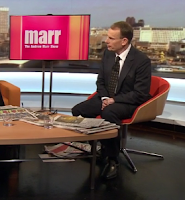 Update: As this aspect of the story is leading both the Sunday Times and the Mail on Sunday, Andrew Marr's paper review did discuss it.

Andrew Marr's take on it was somewhat different to mine though. His focus was on how the story might worsen the plight of the migrants/refugees:


So this is, as it were, another front line in the war of ISIS. They actually hit the immigrants, the refugees, coming in, because of what's going on in Syria, and then they hammer them again because they make Europe more hostile to them.