Is it cos he is a Newsnight reporter? 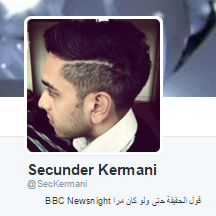 One of the most significant recent stories involving the BBC - surprisingly little commented-upon I think - has been the seizure of Newsnight reporter Secunder Kermani's laptop by the police under the Terrorism Act.


I have to say that I'm torn by several aspects of this story.

Where to sit on that question remains hard for me to figure out.

And, despite my huge qualms about such interviews, I've argued before that there could be a case for giving airtime to these jihadists if such exposure exposes their vile views and vile personalities to the full glare of the public gaze, properly mediated and properly scrutinised by the BBC.

My doubts - as outlined in some of the posts above - are that Secunder's Newsnight reports have often left something to be desired in that respect.

Though I've always felt disgusted by his interviewees...to which some credit might be supposed to gotto Secunder...I've always put that down to me being intensely hostile to such people rather than to Secunder and Newsnight.

And I've also wondered, 'What would those who don't share my hypersensitivity to such things make of such interviews?'

The BBC's defence of his reporting, as on Newswatch a couple of weeks ago, has been that such interviews with jihadis have always been accompanied by strong, critical probing from the BBC.

All I can repeat is that's not really been my experience of Secunder Kermani's Newsnight reports.

....which calls for the question: Why?

There was a pro-Modi guest on that programme. He went untweeted-about.

Now, the question of bias regarding Secunder Kermani's reporting doesn't necessarily answer the question about whether the police should have seized his laptop. They are different questions.

I'm guessing, however, that his Newsnight reports will change from now on, given that his jihadist contacts will now know that the UK authorities will take anything they say to him in evidence against them.
Posted by Craig at 20:52