The right to rant

Nick Cohen penned an article just t’other day, entitled: Nobody will ever forgive the right if they destroy the BBC.

Cohen wasn’t writing primarily about bias. He was arguing on behalf of the BBC and telling us that it is a National Treasure and ‘ya won’t know what you’ve got till it’s gone’, but he did include the passage below.

“And, yes, thank you for raising it, I know, there is BBC bias. I accept that Radio 4 will give us left- and extreme left-wing comedians but never their right- or far-right equivalents. You do not have to tell me either that you can find individual broadcasters who are bent. I have as much contempt for them as anyone else. But the point surely is that the BBC has standards that they are failing to meet.”

A crude summary: “ The audience is intelligent enough to recognise (and if necessary tolerate) a bit of bias, because the BBC has its heart in the right place, and its minor flaws can easily be fixed. “ 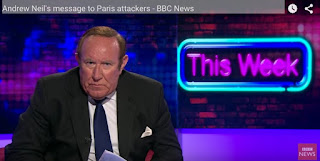 Well, now there’s another article by Nick.  This time he’s addressing the principle of journalistic integrity, impartiality and ranting. He uses the topical example of Andrew Neil’s ‘courageous’ rant, which many people thought of as a long-awaited breath of fresh air. (I must admit I thought it was a long awaited statement of the bleeding obvious).
Cohen’s article argues that it’s inappropriate for respected journalists to exploit their  privileged position by spouting their personal political opinions, particularly when they’re delivered in full frontal, close-up, talking-head-to-camera packages.

I wonder if there’s anything slightly contradictory in these two pieces, but perhaps that’s a bit nit-picking - Nick-pitting - of me.

The below the line comments are, again, gratifying. (This is happening to me quite a lot recently. Someone says something I don’t like, and then masses of the general public dive in and save me the trouble of clarifying my objections in my own head. Yippee.)

I must point out a couple of things from the comments before I end.

Firstly, several complained that he chose to use Jon Snow as another (equivalent) example of dubious inappropriate ranting. Many below the line commenters pointed out that there is no comparison whatsoever between Andrew Neil’s and Jon Snow’s un-journalistic rants.
Not only was Andrew Neil on the ‘right’ side (and Jon Snow on the ‘wrong’) ....

“Oh dear! You attempt to follow your own lead by the 'impartial' equation of Neil with Snow. Not acceptable. Neil knew evil when he saw it and left us in no doubt where he stood, as every good journalist should. Snow is a newsreader and his anti Israel pro Palestine bias is so obvious my parrot can recite it.
There is simply no comparison. Your attempt to draw one is not convincing.”

....but some said Snow is supposed to be a news anchor, whereas Neil is a political commentator. Some pointed out that Neil confined his criticism to ISIS rather than Islamic extremism, therefore his speech wasn’t courageous at all, and someone else said:

“Incidentally Neil is wrong in supposing that Paris will necessarily continue to be a bright shining light.Demographics win”

Even though the outlook is bleak, at least the tenor of the below-the-line response to this piece was heartening. Positively cheered me up for a few seconds.
Posted by sue at 11:42