I thought today’s SML was the best SML I’ve ever seen. Not that that’s saying much. For once, many interesting points were made by all.

The whole panel were against hurriedly rushing in to bomb ISIS without properly planning for the aftermath. Even those with pacifist tendencies agreed that defeating ISIS with military force will have to happen sometime, but not before serious consideration is given to the possible consequences. 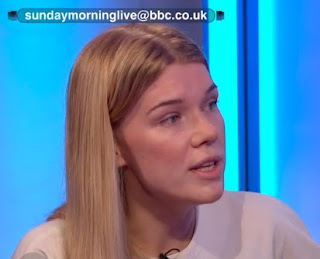 I have enjoyed watching Emily Dyer’s assertive performances when she’s been on TBQs.
The blurb on the SML web page doesn’t mention that she’s from Henry Jackson; it describes her as ‘foreign policy and extremist researcher and writer for the Daily Beast’. She seems to know her stuff. In fact her obvious expertise all but sidelined the other contributors. But SML is a religion-based programme so I suppose they have to include the views of a Bishop. (or an Imam)
Iain Dale was good, and the Bishop - Stephen Cottrel, spoke some sense. Even Owen Jones made some thoughtful comments.

There was an awkward moment when Anjum Anwar (whose huge intrusive image on the monitor was unhelpful) advocated negotiating with ISIS rather than blanket bombing, unfortunately comparing ISIS with the IRA. In fact she too had made some valid points, but by making that particular analogy she handed Iain Dale an easy point-score, enabling him to say indignantly “Are you comparing ISIS with the IRA? You must be on a different planet!” To which she replied with a wry smile “No, I’m on the same planet as you”.  With that, the panel completely ignored her for the rest of the debate. 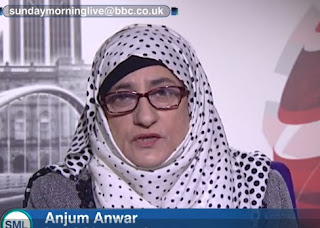 They talked about Assad a lot. Owen said the Sunnis must be supported in Syria, though everyone agreed that Saudi-funded mosques are a major source of radicalisation.

It’s patronising to include over simplified comments and tweets from listeners. If the panel is any good, as they were in this case,  emails from the likes of  ‘Andrew, Manchester’ are irrelevant, and  Tommy (I don’t know who or why he is) can’t even read them out without making mistakes, especially as they’re displayed on a giant screen so we can easily read them for ourselves.

Ditch the giant screen, ditch the vox pops, get some knowledgable, articulate contributors and you’ll have a programme. Otherwise, get rid.

The section about the Lord’s Prayer advert being rejected by cinemas was less gripping. SML didn’t nail it, either. For what it’s worth, I’d guess the cinemas fear audiences will resent being proselytised or preached at.
Don’t want to put off the punters. Are cinemas having a hard time these days? What with box sets and all. Audiences didn’t like being expected to stand still for the national anthem either. Maybe the CofE were aiming for the success of the popular mash-up ‘Perfect Day’.
(‘Arfur who art in heaven, ‘arold be thy name’ isn’t a patch on Perfect Day.) 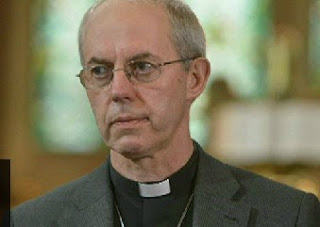 It was amusing to read Harry’s Place on this topic. There were several comments about Justin Welby’s soul-searching over the whereabouts of God, after Paris.
Like -- he should have thought about that before becoming an Archbishop, or any kind of bishop, what with all the genocides that have taken place while the old man in the sky was looking the other way. Anyway, they’ve exchanged words, Welby and God, and now everything’s hunky dory.
No offence.