There was a telling moment of what is sometimes called 'bias by labelling' on this morning's Marr show, wherein Andrew Marr betrayed his own views on a matter of controversy: 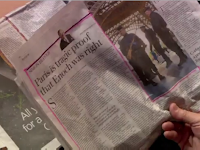 Andrew Marr: Stan, you've got a story, I think, from the Telegraph that you'd like to show us.
Stan Greenberg: Indeed I do. This is a story that says that Enoch Powell is right, which brings us back...What Simon Heff...
Andrew Marr: Simon Heffer, who was Enoch Powell's biographer.
Stan Greenberg: Yes, and what Simon Heffer writes about is about multiculturalism and about the dangers of multiculturalism taking hold in Britain and how that invites everything we are watching now. And we have to get serious about borders. We have to get serious about bringing people into a common culture...
Andrew Marr: Is that kind of very hardline message ringing out across America at the same time?

Simon Heffer's message - either as presented by Mr Greenberg or as actually presented in his Telegraph article - doesn't strike me as 'very hardline' at all. In fact it strikes me as very necessary. And, judging by the comments below Mr Heffer's Telegraph piece, many, many people seem to agree.