This post may seem a bit random but I think I'm onto something, even if I'm not quite sure what I'm onto... 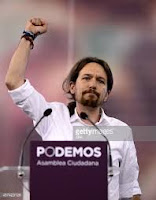 The party was sweeping ahead in the polls and might even win the next general election, apparently, and Pablo was all over the BBC.

Here's a typical BBC report from that time by Tom Burridge:

You may have heard of Podemos thanks to the BBC, but have you heard of the centrist, anti-Podemos, anti-Catalan independence Ciudadanos (Citizens) and their pony-tail-free leader Albert Rivera? Have you ever seen or heard them on the BBC?

What with one thing and another, Spain's political 'upheaval' seems to have dropped from view at the BBC in recent months. I've seen and heard next to nothing from there recently, though I did see one report a few weeks back briefly featuring Mr Iglesias (doubtless during a report from Greece!).

Things have been moving on though and this latest poll is typical of how things stand now, with the centre-right, ruling People's Party firmly back in the lead, the socialist PSOE falling back, Ciudadanos rising to rival the PSOE (and overtaking them in all recent polls) and Podemos languishing after a sharp decline a few months back: 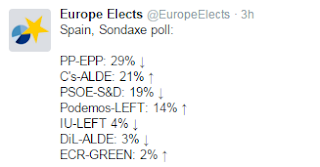 Of course, recent events (the migrant crisis, Paris, etc) have been so huge that Spanish party politics, so widely-reported last year (when Greece and austerity were on everyone's minds), has seemed far less important in the past few months.

Plus, I strongly suspect that pony-tailed firebrand Pablo was always likely to be far 'sexier' as a news story (for BBC types) than determinedly centrist, straight-haired Albert.

Plus, the BBC may have found the thought of a Podemos-led government (maybe even a Podemos-PSOE coalition)  thrilling. The thought of a Cameron-Clegg-style PP/C's coalition might strike them as altogether less exciting.

Here endeth this random post.
Posted by Craig at 10:39