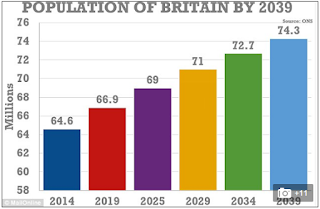 The ONS predictions that the UK population will top 70 million within 12 years and go over 74 million within 25 years were reported differently by the BBC and Sky websites.

The BBC's main article on the story, UK population 'to top 70 million in 12 years', begins by listing the various projections. In its fifth paragraph it moves on to the first explanation for such rises - an ageing population:

In its seventh paragraph it deals (cautiously) with the second explanation - immigration - before moving back to a variant of the first explanation in the eighth:

The Office for National Statistics (ONS) said its latest projections assume that more people will come to live in the UK than emigrate, accounting for about half of the projected population increase.
The remainder is attributed to births outnumbering deaths.

The remainder of the article is given over to the commentaries of two academics: the controversial Professor Christian Dustmann of UCL, who sounds a reassuring note (just as he did prior to the massive spike in EU immigration in the early 2000s), saying the figures show nothing new and that immigration (now explicitly mentioned) helps GDP growth; and left-wing, anti-austerity economics professor Dr Jo Mitchell of Bristol University (who signs letters to the Guardian with Jeremy Corbyn, Len McCluskey, Danny Blanchflower & Co.), who attacks government cuts to public services.

An accompanying video shows the stat that "51% of population rise over next 25 yrs as a result of net migration". 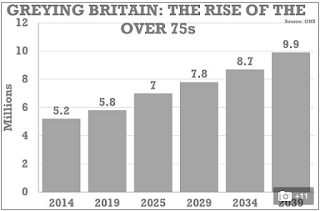 Sky News's main article on the subject, UK Population Set To Hit 74.3m By 2039, strikes a very different note, right from the passage immediately beneath their headline:

The UK will overtake Germany in 2047 to become the largest country in Europe, says the Office for National Statistics.

That's a prediction that doesn't make it into the BBC's report for some reason.

Sky's first paragraph also places the explanation for the predicted population rises firmly on immigration - not on an ageing population:

Two thirds of the UK's population rise in the next 25 years will be due to migration, the Office for National Statistics has said.

Where does the 'two thirds' come from? It's not in the BBC article. Sky immediately explains:

Sixty-eight per cent of the growth would be due to migration and its impact.
This includes 51% attributed to net migration - the difference between those arriving in the UK and those leaving - and the remaining 17% due to indirect impacts, such as migrants having children.

Why didn't the BBC explain that?

Nor did the BBC go into any detail about this either:

The report says that, because a higher proportion of migrants tend to be young adults, the level of future migration has a "much greater effect" on the predicted number of women of child-bearing age and the number of births than on the number of deaths.
Of the 4.7 million natural increase predicted between last year and mid-2039, only 3.1 million of this would happen if there was no net migration. 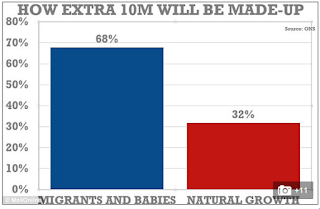 Sky only begins explicitly focusing on the ageing population cause in its eleventh paragraph.

Instead of the BBC reports pair of pro-immigration experts, the Sky report features: (a) its own correspondent Michelle Clifford saying that the ONS figures will reinforce the concerns of those worried that the UK can't cope with such large influxes of migrants and (b) Guy Goodwin of the ONS, who commented on the ageing population aspect of the ONS findings.

The contrast between these two reports is dramatic:
Call me biased, but I'm accusing the BBC of engaging in a large amount of spin here, deliberately damping down the worrying aspects of these findings and underplaying the extent to which mass immigration is the main factor here.
Posted by Craig at 07:52