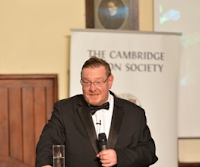 Sticking with matters North American (and with another hat-tip to commenters at Biased BBC), this really is quite something, bias-wise...

It's a report from The Tab, Cambridge University's student news site, recording what was said at a debate on the question: 'This House Believes the American Dream is Colour Blind'.

The Rev. spoke against the motion while The Acceptable Ms Greer and Miss America spoke in favour of it.

Also present was the BBC's Mark Mardell. Can you guess which side he was on?

Here's how the student reporters described the BBC man's contribution:

BBC journalist Mark Mardell sided with Jesse Jackson in the debate, arguing that the number of opportunities offered to people of colour compared to white people is too unequal for the American Dream to be colour blind.

The shootings of Trayvon Martin by George Zimmerman is a terrible display of how differently people of colour are treated to white people. Mardell argues that under-age drinking, smoking a spliff or even using a fake ID are considered a “rite of passage for white teenagers” but become “a pathway to criminality for black teenagers”.

Those African Americans wishing to attain the American Dream must face the reality that “the entrance price to the Dream is that your parents are twice as good and you path needs to be straighter”.

This isn’t exactly the promise of opportunity the American Dream is supposed to represent.

The race angle to the shooting of Trayvon Martin by George Zimmerman is, as many of you will know, highly disputed - as is the actual ethnic identity of Mr Zimmerman. Mark Mardell, however, is unequivocally sticking to the Jesse Jackson line on this - as on everything else it seems.

I'm not in the slightest bit surprised that this is his position on the question posed by the Cambridge debate, having followed Mark Mardell's reporting on such matters for years.

It's a viewpoint that's held across swatches of the BBC too, from all that I've seen and heard over the years from their reporting of U.S. stories....