Getting it about right (again) 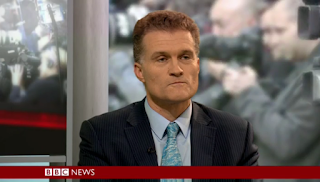 Finally in this series of post of this week's Newswatch, here are the answers given by the BBC's controller of daily news programmes, Gavin Allen. They are preceded by my summaries (in the form of questions) of what they were meant to be answers to. I'll let you be the judge of them:

What priorities did the BBC have in the immediate aftermath of the attacks?

It was interesting. It was such a remarkably confused picture initially and, obviously, the key priority is to tell people what we know and to tell people what's happened, to the best of our knowledge at that stage....and, obviously, it was unfolding as each minute, each hour went on...but also what we didn't know. I think the risk is you leap to lots of conclusions, you link different attacks. And so, what we tried to piece together as we went through, the priority was getting people who were there and, obviously, getting our own people to Paris, and also making sure that anyone we did get to Paris was entirely safe, knew the risks, and we had backup, and was all carefully planned.

What about concerns about showing disturbing imagery, uploaded from mobile phones onto social media, without warning?

In a way that's not unique to Paris. As you say, it's always the case, particularly now, with footage from so many people witnessing so many events. It's about verification. And it's also, as you say, about assessing it. When are we broadcasting this piece of footage? Is it appropriate? Is it required? Does it tell a story? Does it help the audience understand what's been happening?

Shouldn't the BBC have given as much attention to attacks outside Europe, such as in Lebanon?

I think it is a difficult balance and, obviously, you can't conduct news based on death tolls in various countries and whichever has the highest death toll goes higher up the running order. So it has to be a judgement based on what's the impact of any given incident, and also over time. I mean, the incident in Paris clearly has knock-on impacts not just on the families involved and Paris but on migration policy, on intelligence failings, and a whole host of other (sort of) areas to explore. But it doesn't mean we wouldn't explore those Africa, Asia or other huge disasters or tragedies.

Did the focus on fear increase the panic and help Islamic State?

I think at the end of this, an incident in which 129, and it may end up being more, people are killed in the middle of a capital city...it's not the coverage of that that is going to lead to fear increasing, it is the attacks themselves. And while I absolutely understand, we've got to be incredibly responsible, incredibly restrained and careful in how we tell these stories, and tell the background to what happened, the impact of what happened and hear eye-witness accounts. It's not adding fear, it's just reflecting that there is fear.

It wouldn't pretend it's for everyone. Personally I found it actually...I take the points about it becomes entertaining or drama. I think it was compelling. and I don't think that's necessarily a bad thing that it is compelling. It's a chance to pause, reflect on what's happened, and above all reflect on individuals. The danger with an attack or a series of attacks like these is that you talk of big numbers, you talk of geopolitics, you talk of organisations, and you do actually lose sight of the individual people who have lost their lives or been injured in it. And I think by speaking to people who were there at the scene or families of those who have died I think you do get a much greater picture of a sense of the tragedy actually because it has impacted on real individual people.