What the terrorists want

When Craig and I first imagined this blog we envisaged a lively below-the-line commentariat, with brilliant ideas being batted back and forth good-humouredly.  No we didn’t. We thought we’d be plagued by trolls, antisemites and fools. Maybe the absence of frantic and furious btl interactivity is a jolly good thing.

I can’t remember why I started this, but I intended to apologise for the recent paucity of posts on this blog. Events seem to have prevented both of us from posting. While I was out of action someone stole my thoughts. Well, not just one person, several.

I’m not the only one who wanted to ask David Cameron and Theresa May, if IS / DAESH / ISIL /ISIS is nothing to do with Islam, how about Al Qaeda, Boko Haram, Al Shebab, Islamic Jihad, the Al Qaeda affiliate that just went berserk in Mali and the Jew-stabbing loonies in Israel --- how about them? Are they anything to do with Islam? Or not? Let’s be clear, as the politicians say.

Melanie Phillips and many others voiced similar thoughts. Who believes IS and all the rest of them have nothing to do with Islam? No-one. No. One. No-one’s fooled, so  stop it. Stop being so silly.
*******

I see Nick Cohen has been addressing the vexed but hypothetical question of life after the BBC. He fears that ‘the right’ is plotting to deprive us of our national treasures, like Bake-off and the Archers, and the left will never forgive them. “Never mind a little bit of bias” he says, “we can’t all be perfect.”

Then there was another bizarre Question Time. See Douglas Murray.  Mehdi of “cattle” fame was on again. 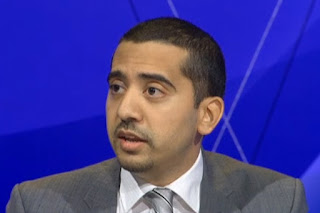 I actually marvel at everyone’s superior insight in grasping  ‘what the terrorists want‘. Knowing exactly what this is and depriving them of it is the way to go, apparently. One of several ‘things the terrorists want’ is for us to take measures to prevent them from carrying out more atrocities, so we mustn’t. We must keep on living our merry, laissez faire, happy go lucky, western lives as though nothing has happened. That’s the way to stand up to the terrorists. Also, they want us to bomb them, so we mustn’t. Mustn’t let them win.
Of course, the “We love death as you love life” mantra is a tough one because if it’s sincere, well, they’ve already won. It’s  the ultimate stopper. Un-winnable for us.

Oddly enough (silly me) I had been thinking that what the nothing-to-do-with-Islam terrorists really really want is a caliphate: world-wide pure Islam where no creativity, musicality, or any kind of independent thought can interfere with a proper Muslim lifestyle. The terminal suppression of humanity is all they crave, in an ideal state.

The deterrent effect of gruesome punishments, (limb-amputations, being thrown off tall buildings, being beheaded or stoned to death) will guide the Proper Muslim on the trouble-free journey to paradise. Obedience and total submission, what’s not to like?

As the three sisters who ran away to join the jihad said, we want our children to grow up knowing the real Islam and “to be brought up as Proper Muslims”.
David Cameron might want to put them straight about that.

Yes, it could happen here, they say. British Muslims feel frustrated. They’re aiming for global war.
Ed Stourton treated the relatively banal observations from British Muslim journalists as pearls of wisdom.  As far as I was concerned nothing new emerged from that half-hour, apart from the fact that one of Lee Rigby’s killers had “Daddy issues”  -
don’t we all?

I thought Ezra Levant’s video on Daphne Anson’s blog summed it up.

“Apart from very basic facts, there’s almost nothing you can take at face value from the MSM.”

Daniel Pipes says terrorist attacks like the one in France push ordinary citizens to the right, towards embracing national security, restricting immigration, especially Muslim immigration; but he predicted that it would push the official people - what he called “the four ‘P’ professionals” - (Politicians, the Press, Police and Professors) in the opposite direction.
To maintain their worldview they’ll have to go even further to the left, to demonise as racists anyone who criticises Muslim migrants; to introduce censorship laws, not to stop Imams, but to stop those who criticise Muslim Imams; to open the floodgates to even more migrants.

I always thought that being ‘right’ meant you had a moustache and you hated Jonny foreigner whom you might refer to as a wog or a darkie. You believed in corporal and capital punishment and you had sharp creases in your trousers.

I’m not that. I’m shocked shocked that I’m thought of as ‘on the right’. (Not in the right.)
That’s why I’m supposedly trying to destroy the BBC, and why I’ll never be forgiven. Only I’m not, but what I really, really want is the BBC to properly reflect my views as well as theirs. I’d like the BBC to be what it’s supposed to be. Reliable, balanced, truthful, accurate, topical, grown-up.

Maybe the BBC think they “know what the right wants”, and they’re determined not to let us win. They won’t change, because that would be a victory for us. Above all, they mustn’t let us win.
Is this war?