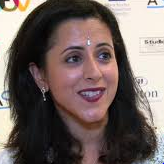 A couple of comments have appeared today on a much earlier thread here, doubtless prompted by Anita Anand's behaviour on today's extended Any Answers.

As you may miss reading them, I thought I'd also post them here:

I can't stand the woman - her listening skills are appalling, she interrupts and imposes her own opinions constantly in a high-handed and disdainful manner. So much for freedom of speech! Often I'm frustrated that a sensible, thoughtful and intelligent caller is cut short by her without having been properly understood, and I often turn the programme off, even though I'm keen to hear what people want to say, because she has annoyed me so much.

I agree wholeheartedly with the opinion of 'Anonymous'. I do not need Mrs Anand to censor other people's opinions for me. Nor am I interested in her opinion, largely because it is tiresomely BBC-predictable. Her job is to facilitate the communication and comprehension of her callers' points, to seek clarification when needed, and to impartially challenge the opinions and assumptions they hold. BUT ..... without favour, and certainly without the large dose of political correctness she use to distort and suppress those opinions. She really should not be entrusted with the delicate job of presenting a cross-section of the nation's views. I found the thinly-veiled, clumsy censorship Anand employed this evening on 'her' programme deplorable. I have never before been moved to write any response to what I have read or heard in the media, but her behaviour this evening was truly shocking. 'Free speech' is not only for those politically correct employees of the BBC such as Mrs Anand.

Oddly, Anita's behaviour on today's edition wasn't anywhere near as bad as it can be for the first 40 or so minutes. It's only when the criticism of Islam began at just after the 40-minute mark that Anita really got going.

....though hearing her mount her high horse and then seek solace in the arms of the following, strongly pro-Muslim caller was certainly quite something to hear, and I urge you to listen to it (as a bit of light relief)!....

....but her treatment of the Turkish lady (beginning at 46:52) who argued what might be characterised as 'the Douglas Murray line' on Islam (that Islam needs its own reformation) came in for exactly the kind of treatment described in the comments above. Anita kept saying she could understand the point the lady was making - even though it was perfectly clear to me what she was saying. It wasn't a pleasant listen.

Another week, another 'Anita Anand experience' then.
Posted by Craig at 17:16