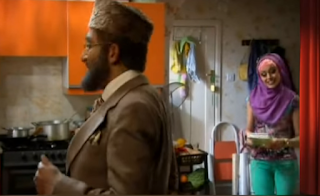 I really haven't watched BBC One's Citizen Khan very much - though I used to enjoy the character of Mr Khan on Bellamy's People (and on Radio 4's Down the Line), from which the show sprang.

Though I have laughed at some of its jokes (especially after having downed a fair amount of non-halal wine to celebrate the end of {Friday prayers} the working week), I've unfortunately never quite found it funny enough to watch regularly.

(Give me Bellamy's People, Down the Line or From Our Own Correspondent any day for guaranteed belly laughs. That Lyse Doucet has me in stitches all the time).

Oddly, whenever I think of the programme I tend to think above all about its repeated use of the phrase 'dingly dangley' or 'dingly danglies' to describe a man's dingly danglies. That could just be me though. Happy memories of the sitcoms of my youth in the 1970s.

For those who are unfamiliar with it, here's a typical sample of Citizen Khan's humour, taken from probably its most famous episode:

Citizen Khan: I'm going to the mobile men's clinic at the mosque.
Alia: What?
Citizen Khan: They're doing the testing for heart disease. It's very common with us Pakistanis. Did you know we're in the top three groups most affected? Top Three! Good, eh?!!
Alia: Is something wrong with you?
Citizen Khan: No, it's not for me. I'm fit as a fiddler. They're testing the young peoples, so I'm taking future son in law.
Alia: Has Amjad got a heart problem?
Citizen Khan: No, unfortunately not.

And if that's not got you screaming hysterically with laughter, then try this from the same episode:

Alas, it's not all howlingly funny laughs like this it seems.

As per the Radio Times, via the Daily Mail and Breitbart (if no one else yet)...

Citizen Khan, namely actor Adil Ray, has received abuse and death threats from aggrieved British Muslims accusing the programme of mocking Islam and being racist in its 'peddling' of 'stereotypes' about "Asians".

The odd thing about this is that this programme was, of course, very obviously intended by the BBC to present a warm, positive, normalising portrait of a British Muslim family and to win the British public's heart.

Yes, the main character is a classic BBC sitcom male lead - a foolish, self-deluded man - but most classic comedies have such characters at their heart, and that doesn't detract from the overall message.

And the programme was, quite clearly, prominently placed on primetime BBC One in order to further promote that warm, positive, normalising message to as widespread (and mainstream) a BBC audience as humanly possible.

And yet still the abuse and death threats from Muslims came.

Hopefully, the BBC will go beyond the confines of its former satellite, the Radio Times, and follow the Mail and Breitbart's example in order to make a major fuss about this.

It may not be as funny as Down the Line or Fawlty Towers or Only Fools and Horses or From Our Own Correspondent but Citizen Khan and its likeable-sounding star need to be very robustly defended by the BBC.