Last night's The World Tonight on Radio 4 was "a special programme about immigration and social cohesion with a panel and audience". It came from Oxford University's Refugee Studies Centre.

The most obvious thing, BBC-bias-wise, to say about it was that the panel was unevenly split between two pro-mass immigration guests (Saira Grant from the Joint Council for the Welfare of Immigrants and Professor Alexander Betts, director of the Refugee Studies Centre at Oxford Uni) and one anti-mass immigration guest (Alp Mehmet, vice chairman of Migrationwatch).

Even without listening, I bet you can guess what happened. Alp Mehmet was firmly on his own here, with Saira Grant and Alexander Betts making similar points to each other.

Then Mark Easton looked at "the link between social well-being and increased ethnic diversity". His talk may be summarised as follows:

The American social scientist Robert Putnam once confided to Mark that he was troubled by recent studies suggesting that diversity was bad for social well-being and, short after, published an article saying that in the short run immigration and ethnic diversity tend to reduce social solidarity and social capital.

The research was based on US findings, showing that different groups tended to hunker down, that trust was lower. community cooperation rarer, friends fewer.

This was "seized upon" by people here who argued that immigration was bad for community life. 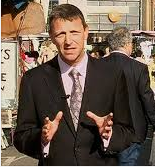 However, said, Mark, recent studies have contradicted such negative findings. They say Puttnam's findings don't apply in the UK and they refute his main premise.

One paper found that trust wouldn't improve if people lived in ethnically homogeneous communities. Other papers found that if you removed social and economic factors from the equation ethnic diversity improves social cohesion. A study of London found that impact of diversity varies between age groups, with a strong positive effect of immigration on young people.

It's all highly contested, said Mark, but even so, even Robert Putnam's contention that increased diversity has a bad effect on social capital only applies in the short term. In the long run, Putnam says, immigration and diversity are "likely to have important cultural, economic, fiscal and developmental benefits".

Mark then closed with a question:

So if that's right would politicians, and indeed voters, be prepared to put up with short-term tensions in the hope of gaining longer-term benefits?

I believe I've accurately summarised what Mark Easton said there.

If you stand back and re-look at it, it amounts to arguing that the case against mass immigration, as presented by Robert Putnam and seized upon by people like Theresa May, doesn't hold up here in the UK. All the other research shows it to be wrong. Worse (for people like Theresa May), even Robert Putnam says that mass immigration is great for us in the long run. So every study, it turns out (from Mark's report), actually agrees that mass immigration is good for society, and "Are we - politicians and people - brave enough to think in the long-term rather than the short-term?" seems to be the gist of his closing question.

That is clearly pro-mass immigration reporting, is it not?

Tellingly Alp Mehmet took exception to Mark Easton's report (especially the bit about how immigration improves social cohesion if you take social and economic factors out of the equation) while, just as tellingly, Saira Grant strongly defended it and Alexander Betts repeatedly echoed and cited it approvingly.
Posted by Craig at 12:19