Prelude to a Sermon 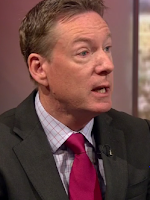 Though the above post is probably most likely to attract attention, I have to add that the rest of what Frank Gardner had to say on Andrew Marr's paper review was very interesting (if much less controversial) - so, just because it might also interest you, I'll share some of that too:

Andrew Marr: Frank. you've got a story...This is the whole question of how secure Europe's borders are. You've got the 'Independent on Sunday'.

Frank Gardner: Yeah, it says exactly that: "Europe's border policy faces fresh scrutiny", and it's one of the quotes that stands out here. It's from a German minister - Bavarian finance minister - who says, "The days of unchecked immigration can't go on. Paris changes everything."

I think there is a danger of overreacting here, but a lot of people are going to be saying, look, the idea that someone can just drive across from Belgium into France or Germany into France with a car boot full of weapons completely unchecked is probably over - or at least needs to be looked at again. Britain is slightly different, separate from this - not just because it's an island but because it's not part of Schengen, so in security terms we're in a different place. Not immune...

What it means...leave aside the politics of it, but simply in terms of armed control...it means that it's harder to get powerful automatic weapons like Kalashnikovs, that have been used twice this year in Paris, it's harder to get them into the UK. Not impossible - and there's still the Northern Ireland connection - but it's much harder. It's one of the reasons why they think we haven't yet faced a marauding attack, what's called an MPTA (a multi-pronged terrorist assault), such as we've just seen in Paris here in Britain.

Andrew Marr: Something I don't understand...I'm going to ask Frank about this...is whether the French state's powers of interception and surveillance are roughly the same as our government's, or are they different?

Frank Gardner: I think they're different. They've been very tough on terrorism, probably tougher than we were, since 1995 because they had...the first recent, modern wave of terrorism that they suffered was in the mid 90s with people from what was called the GIA, which was an Algerian militant group that carried out bombings in Paris and Lyon, and they were very cross with Britain that some of the people that they were hunting simply crossed the Channel and sought refuge in Britain. And Britain at the time was kind-of, ah well, you know, they've not broken any laws here so let them, you know...and actually in retrospect that was a mistake. So Britain and France are now pretty much hand-in-glove. British intelligence has people embedded in French intelligence and vice versa, and the police have sent a team over yesterday to work with the French.