A few lays ago I linked to Kevin Connolly on the PM programme suggesting to Eddie Mair that Boris should have been more tactful. He was referring to Boris’s disparaging comments about BDS, which got him into trouble with the P.A.

“Kevin Connolly later told Radio 4 listeners:
“You know, official visitors here; foreign embassies, international news organisations, us – everyone weighs their words on these matters with infinite, exquisite care – or at least we try to – because it is just so easy to give offence to one side or the other….”

Mustn’t offend the sensibilities of the Palestinian BDS campaigners.

Kevin Connolly and the BBC may think BDS is a perfectly legitimate campaign. It seems that where Israel is concerned, the BBC deems this topic debatable. Last week’s Sunday Morning Live tackled cultural boycotts. In the current circumstances, I’d have thought that people might reconsider. Israel has considerable experience of dealing with Islamic-inspired terrorism so boycotting Israel seems like a particularly stupid idea.
It was disappointing that Douglas Murray and Yasmin Alibhai Brown who had been opining  on Daesh in an earlier part of the programme were no longer on the panel when this topic came up. Douglas’s, and even YAB’s opinions would have been more interesting than the fools that were brought in to replace them; a pro BDS actress, and a Jeremy Corbyn-like BDS advocate, unfamiliar to me.

The actress supports ‘cultural’ BDS because she wants to bring down ‘Israeli apartheid’. No-one asked her what she thought apartheid actually meant. She seemed to think that her Palestinian friend being unable to travel freely between Nazareth and Jerusalem constitutes apartheid. No, apartheid is not precautionary security measures. That’s inconvenience. It’s not apartheid. There is no apartheid in Israel, lady.

In any case, people who claim that the boycott worked in South Africa speak as though it brought about a fairy-tale ending.  Is present day South Africa a model that other countries aspire to? The boycott may have helped bring about the demise of a genuinely racist apartheid policy, but South Africa is no utopia and race relations there are not so wonderful these days.
Imagine how a Palestinian-majority Israel would look. And she’s aiming for that with her BDS? 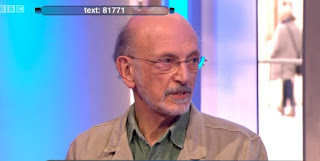 The pro-boycott chap with the Jeremy Corbyn aura must have been an academic. He said he thought BDS was a good way of engaging with the Israeli academics he was boycotting. Then why boycott? Why not simply engage? Cut out the middle man. His dysfunctional cultural boycott looked like covert attention-seeking.

Annoyingly, Sian didn’t want to let the argument deal directly with the specifics, as in the ethical and moral legitimacy of boycotting the one and only Jewish State. She wanted it to be a debate about the efficacy of cultural boycotts in general; but it was never going to be that, because these boycotters were indeed boycotting Israel in particular and no other country. Let’s face it folks, the truth is that boycotting Israel while not boycotting any of the vast array of genuinely abusive regimes in the world is plain racist.

Did anyone catch George Osborne today announcing his plans to defeat cyber crime?
Israel happens to lead the world when it comes to cyber security and Osborne is asking for Israel’s help. I suppose the BDS idiots would rather boycott it.


Do they actually realise that what happened in Paris last Friday wasn’t so very different to what Israel faces, day in and day out. We could all learn a lot from Israel but I suppose the idiots would rather boycott that too.
Posted by sue at 22:05