Other concerns about the BBC's Paris coverage 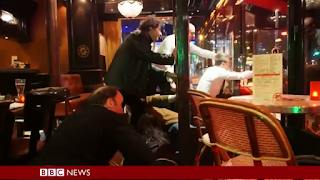 Sticking with this week's Newswatch, here are some of the other bouquets and brickbats (mostly brickbats) broadcast by the programme.

I want to record them because, even though they aren't the kind of complaints that blogs like ours are usually interested in, they are quite thought-provoking.

The only bouquet ran as follows:

Thank you for such excellent news coverage from Paris over the weekend. It has represented the best possible standards in news broadcasting, providing calm, balanced news reports, despite very tense and potentially dangerous situations.
Chris & Joan Ure

The first line of criticism, pursued throughout, concerned the fear that Islamic State (and the like) are only being served by such heavy promotion of the panic/terror they sought to cause:

It must have been very gratifying for the terrorists to see how much fear they had created - not just the damage they'd done directly to the victims themselves but how much they were impacting on the wider society. That would give them a great deal of satisfaction...and feel that their actions are worthwhile. That's exactly the sort of impact they want to have.
Bernie Stewart

I think if very little was said in the Western media about these events I can only imagine that the leadership of IS or other terrorist groups would be extremely disappointed. They crave this sort of publicity and they rely on it for recruiting others and for spreading that fear and terror which they so much want to do. So I think we have to be very careful that we don't actually do their job for them.
Dr Richard McCallum

This is a tricky one. Yes, Islamic State will have been watching this coverage (strange, murderous, religious f*ckers that they are) and they will undoubtedly have been absolutely revelling in it but...

....Mr Stewart and Dr McCallum might also care to reflect on the fact that, whether we like it or not, we now live in a different age - the age of instantaneous social media where Twitter (and the like) will ensure that millions of reports (true and false) will be flying around the world within minutes of such atrocities.

The mainstream 'respectable' media would surely be utterly discredited if they were seen to be censoring stories of such importance on a regular basis, wouldn't they?

The BBC, whatever its other faults, is surely right not to refuse to report the effects of an IS terrorist attack. The attacks have happened, and so have the effects. And in not reporting them, MSM organisations like the BBC would (contrary to what those Newswatch viewers imagine) surely merely serve to encourage IS to become ever more 'spectacular' in their attempts at mass slaughter in order to force their atrocities to be reported.

The second main area of criticism concerned charges that the BBC was being overly sensational:

The events that have happened in Paris over the last few days have been horrific and I don't want in any way to belittle that or diminish it. My concern is that there seems to be a morbid curiosity in reporters pursuing witnesses of the events almost immediately afterwards for their reactions, for their emotions. How do you feel about what's happened? What must you be going through? I think this could be left for some time afterwards.
Chris Holmes

Another aspect of the reporting of these events that concerned me was the use of a photo montage at the end of a news bulletin superimposed with some very mournful piano music. This seemed really inappropriate at the time, and it sounded more like a dreadful soap opera than real events that have happened.
Chris Holmes

I think much more factual reporting and less emphasis on the huge emotional impact it had on various individuals could have been more acceptable. And it would have been kinder to those individuals. I do question how much focusing on those raw emotions will actually make it worse for them.
Bernie Stewart

I think there's always a danger of the invasion of privacy at these times when you're looking for people's reactions and immediate emotions. I think that can then very easily move on to almost making it into a drama, something that becomes - for some people anyway - entertainment. It becomes gripping. They want to watch it because it looks a little bit like some of the dramas that we might watch on television anyway. And I think we need to avoid sensationalising or making news such as this into an appealing drama that people actually begin to have some kind of morbid interest in.
Dr Richard McCallum

I can see the point of the first three criticisms here. Part of me would prefer the BBC to try to stick to facts. However, does coldness and strict 'impartiality' after such an event really appeal to us? Isn't it OK to be moving, if you're not mawkish or propagandist? It's another tricky one.

Dr McCallum's point is even trickier because I really don't want to accept his bleak premise - that lots of people were watching the news of the Paris terrorist attacks for the sake of morbid enjoyment, as if it were a TV drama.

Surely not? Surely people were watching because they wanted - needed - to know what was going on?

It would be very disturbing to think otherwise.
Posted by Craig at 21:11