People who are infuriated by the fact that the BBC bombards the airwaves with lefty comedians usually say they don’t find them at all funny either.

I have to admit that although real wit has to be based on truth and reality, (otherwise it falls flat and is truly infuriating) some of the folk whose politics we love to hate can be funny with it. Well, I think so.
One exception; skits and jokes predicated on the assumption that Israel is an evil, baby-killing rogue state.  Jeremy Hardy specialises in these. His natural ability for comedic wit and humour is tainted by his open and rabid pro-Palestine activism. Unfunny, racist and ignorant.

I do like people being silly. Alan Davies, for one, used to make me laugh.   Andy Parsons sometimes comes out with something enigmatic and funny. Bill Bailey raised a smile, once upon a time if I remember rightly. (Or was I thinking of someone else?)

I watch lefty comedians with an open mind, taking my approach from the BBC’s “political views left behind” Twitter policy. I hope to be entertained by the likes of, say, Robert Webb, although his political views are just about the opposite of mine. Which brings me to David Mitchell. 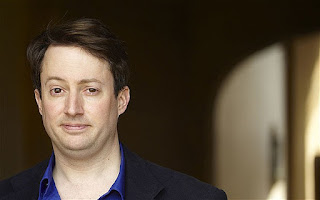 Here’s a taste of Brendan's article:

“I’m more interested in what has happened to Mitchell himself during the Peep Show years.He’s metamorphosed from a side-eyeing, witty observer of the weirdness of 21st-century life into a faux-outraged railer against anyone who doesn’t share his outlook.”

“Whether it’s in his fittingly named Soapbox videos for the Guardian or in his hectoring monologues on the dire and mercifully short-lived 10 O’Clock Live, his delivery has lost its early warmth and sweet uncertainty and is now all shouty sermonising. It’s like being stuck in a lift with a drunk polytechnic lecturer. He’s a Twitter rant made flesh.”

Is Omid Djalili a Mountain-out-of-a-Molehill made flesh? Incidentally, you can understand why witty comedians are given a platform to opine on serious matters. Their wit implies intelligence. Weird, or what?

Commenter Hugh_Oxford (who also said, earlier in the thread: “Ah, Marcus Brigstocke. The pied piper of the wilfully ignorant. Or is that Jeremy Hardy?”) had a good rant. I hope he won’t mind me reproducing it here in full. He got a right old hammering for it of course.

"There does seem to be this danger of confusing light entertainers, comic actors and comedians. David Mitchell is a great comic actor. He's a passable light entertainer. But he isn't much of a comedian.Comedians provide insight and tell deep truths. Chris Rock and Amy Schumer in the US, eviscerating and exposing liberal values and contradictions, are great comedians.But because (with a couple of exceptions) comedy is based on deep truths, it's become impossible in the UK. That's because the truth has become a crime. A real comedian would be confronting the absurdities of multiculturalism, Islamisation, our own demographic annihilation, Sweden's suicide, the madness of transgenderism and "same-sex marriage", the hypocrisy of pro-abortionists calling for the abolition of Trident, and so on, and so forth. But the culture of fear and censorship is now so high, these matters cannot be discussed.And it would be hard to make comedy out of these anyway, because living in a dying society isn't funny, and it's hard to create absurdity in a society that is beyond parody. We ARE living in a very dark Monty Python sketch.That's why we are stuck for "comedy" with inane cretins and vapid, tepid, trite leftwing parrots like "Jeremy Hardy", "Sue Perkins" and "Arfur Smith". People whose contribution to the world of actual comedy could be written on a pinhead in four foot letters, whose actual purpose is to provide a background noise and a mild distraction from the appalling reality of the world we now live in."