This morning, another unsettling listening experience.  More or Less: behind the Stats.  Sympathy for Jihadis. 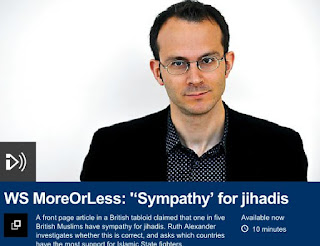 More or Less is about statistics, so the Sun poll should have been right up its street.
Early as it was, I thought it would be worth a listen. I think this is an abridged version of a lengthier broadcast on the BBC World service.

We heard that the poll had prompted angry responses online, like one that was read out (I presume we heard the voice of the author)  apparently a college lecturer called Rial Khan (phonetic) from Leicester in the UK. This is a transcript:

Blimey Mary. I hope I never get into an argument with anyone who’s been lectured by such a genius of advanced logic
Next came a string of ‘hashtag one-in-five‘ Tweets of wit and humour, such as  “One in five Muslims sleeps with his beard on”, clearly demonstrating that one in five Muslims have a Jolly Good SOH.

In response The Sun stated:

“It is not for a polling company to endorse or otherwise the editorial interpretation of a survey. The Sun published the poll’s findings clearly and accurately, including the questions in full.”

So although the vast majority said they had no sympathy, as many as 19%  had some or ‘a lot’.

One objection was the  ambiguity of the question and in particular the interpretation of the word ‘Sympathy”. Dr Maria Sobolewska, an expert on polling who specialises in ethnicity, religion and race relations, said that some of the interviewees may have misinterpreted the question.

“Did they simply feel that the situation for Muslims was hard, with all the wars around the world and conflict, and perhaps prejudice in Western Europe, and therefore this particular person feels some sympathy with how desperation may lead some young people to terrorism? Is it just a kind of emotional understanding, or is it actually weak or tacit support of terrorism? I really think making that leap into the second conclusion is a bit taking it too far.”

By that token, what’s the point in doing any survey at all? if you’re going to analyse, apologise for and re-adjust uncomfortable findings, why bother with a survey in the first place?

“Desperation may lead  some young people to terrorism?” Now who’s making leaps?
Dr Sobolewska would have preferred the word ‘Support’ to ‘sympathy’, which I daresay would have produced an equally questionable outcome, simply because ‘support’ implies active, rather than passive involvement in Jihadism, therefore would have been just as ambiguous and just as likely to produce a misleading outcome.  I think Dr S simply didn’t like the Sun, didn’t like the questions, didn’t like the findings, the conclusion, or the negative impression it gave of “the Muslims”.

The Survation spokesman explained that the question had been phrased specifically so as to compare it with a similarly worded survey that had been carried out earlier in the year. They should have let him  explain that in the first place. It might have saved time.

There are all sorts of leading and loaded questions surveys could devise. “Do you support, say, beheadings and devil worship? “The outcome would, of course, be predictable, and the survey would be pointless.
Do you think this programme fell short of the standards to which licence payers are entitled to expect?
1: Agree; 2: Don’t know; 3: Don’t care: 4: Elvis

Labels: 'More or Less', The Sun