You hear a lot on radio 4 if you wake up early enough. You don’t even have to get out of bed, which is nice.
Still on the topic of people’s shallow grasp of Islam, here’s one small example of a BBC broadcaster’s puzzling and counter-intuitive respect for devout religiosity.

Though the UK is nominally a Christian country, religion currently plays a declining role in society. Journalists and presenters are predominantly from the secular left, but one baffling anomaly emanating from this non religious demographic bucks the trend. Naive admiration for devout religiosity.  Oddly, it seems exclusively applicable to one particular religion. Not Christianity.

I don’t know whether Helen Mark is a Christian or an atheist, but I don’t think she’s a Muslim. Either way, see what you make of this. 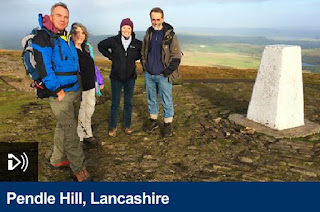 Helen Mark on Open Country, (Radio 4 early Saturday morning) encountered “a party of schoolchildren” at the foot of Pendle Hill, Lancashire, which she was about to climb.

“We did our prayer up there” one boy said. Helen replied: “What a wonderful place to do that. In fact this hill has a very strong religious history” she continued, referring to the unfortunate local women who’d been tried for witchcraft 400 years ago, known as the ‘Pendle witches’. “That’s just a rumour” asserted the children. “Witches aren’t real”.

At the end of the programme Helen recounted: “Earlier when I met the children from the Muslim primary school, they told me that they’d said a prayer, on the ridge where we are now. Isn’t that a lovely connection with what you’ve been talking about?” (they’d been discussing the witches)

I was immediately struck by the admiration with which she described something (it seems to me) quite unlikely that she knew very much about. She might have been confusing Islam with Christianity.
I know this will seem trivial, but it’s a symptom.

Brownie points to the school for getting the under 11s out into the fresh air. But prayer? Prayer to Allah? During outdoor activity? Describing that particular manifestation of religiosity as ‘lovely’ is a little strange, but juxtaposing it with 400 year-old trials for witchcraft is plain bonkers.

“Witches aren’t real” seems a sensible statement, but trials for witchcraft were real enough. As for Allah, well, the jury’s out.