Nabila Ramdani is back 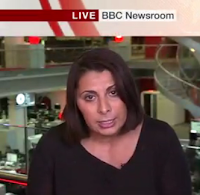 In the wake of the January jihadist massacres in Paris, French-Algerian journalist Nabila Ramdani was all over the BBC, to such an extent that many people (including us) commented on the fact.

She became the BBC's go-to 'expert', despite espousing some startling opinions - especially her repeated criticisms of the murdered writers at Charlie Hebdo for offending Muslim sensibilities.

It wasn't surprising, therefore, to switch on Newsnight last night and find her on their hastily-summoned panel of experts, or to wake up this morning and find that Today had invited her to act as one of their two experts throughout the entire programme (she made three separate contributions), or to see that she then moved immediately over to the BBC News Channel after Today had ended to act as their 'expert', contributing three separate interviews over the course of the following two hours.

Having heard so much of her I heard her making the same points across all three platforms, using remarkably similar forms of words on each occasion - especially to describe the attacks, which (rather disconcertingly) were almost word-for-word each time. She also twice stated that now wasn't the time to criticise the French authorities over security before going on to do precisely that (at some length on one occasion). And she was also keen to express her concerns that Muslims might be unfairly 'stigmatised' because of the attacks.

I did notice, as at the time of the earlier Paris massacres, that the killings at the kosher supermarket in January didn't get a mention. They never seemed to engage her attention much. She didn't mention them on any of these platforms today, despite repeatedly recalling those earlier attacks.
Posted by Craig at 18:20