"Look, who drove me to jihad? Nigel Farage" 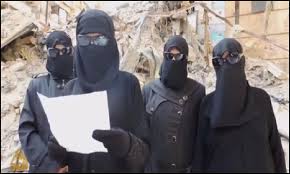 Nick Booth's Conservative Woman article Nigel Farage responsible for jihadi brides? No, it’s another leftie fantasy promoted by the BBC is well worth a read.

It focuses on an interview that BBC Radio London chose to broadcast last week - on Remembrance Sunday of all days.

The interviewee was satirist/playwright Henry Naylor of BBC Two's Parsons and Naylor's Pull-Out Sections fame (the 'Parsons' in question being Andy Parsons, the comedian best known for his catchphrase 'OH MY GOD, THE DAILY MAIL!!!').

Mr Naylor has written a play called Echoes which draws parallels between "smart" young Victorian women who headed out to British India to get married and "smart" jihadi brides going off to marry the likes of Jihadi John (though it may be rather too late for the latter to marry Jihadi John himself now, given that - it seems - our American cousins have sent him to receive his 72 raisins, inshallah).

Both sets of young women felt/feel themselves to be without prospects in Britain, according to Henry Naylor. In Victorian England you had two choices, said our Henery: "to be a governess or the Queen, that was basically the two options". Both sets of women were/are "very intelligent" and both wanted/want to "do something with their society".

Please read Nick's take to get the full flavour of this 'BBC comedy'-stamped idiocy (though the live interview described by Henry Naylor did happen) and then, if you're feeling especially masochistic, please also listen to the BBC London interview itself to hear a couple of BBC presenters - Harriet Scott and Tim Arthur - cheerily waving through every single preposterous/controversial statement without the slightest demur.

All I will add to Nick's piece is to quote a part of that BBC London interview's closing moments, which sum the whole thing up:

Henry Naylor: In fact it's very sympathetic. I mean, one of the opening scenes is about our jihadi brides saying, "Look, who drove me to jihad? Nigel Farage. You know, here I am...here are 4 million people who are effectively voting for this chap who are making it very difficult. You know, there are 4 million people on the streets of Britain who are anti-immigration, who are making disparaging comments about Muslims". So it's actually very sympathetic from that point of view.

Now that really is beyond satire.
Posted by Craig at 20:24