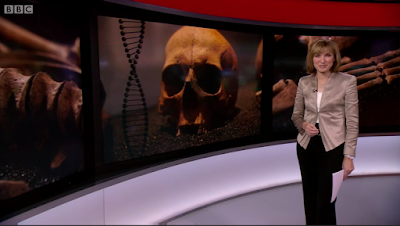 Yesterday's BBC One News at Six contained the following in its opening headlines:

Fiona Bruce: And what bones from 20,000 skeletons dating back centuries tell us about our multicultural past.

Midway through the programme came:

Fiona Bruce: And still to come...Written in the bones. Ancient skeletons reveal how London has been a multicultural society since the very beginning.

Shortly after came the report itself:

Fiona Bruce:  London is known for being a culturally diverse city and now a DNA study's confirmed that that's been the case since Roman times. Researchers at the Museum of London are analysing the remains of more than 20,000 people who lived in the capital 2000 years ago. The first results from four people show were mixed race, another was from Eastern Europe and one was a native Briton. Our science correspondent Pallab Ghosh has this exclusive report.
Pallab Ghosh: It's the most diverse city in the world. People who have their roots from across the globe have made it their home. But 2,000 years ago it was just the same. That history is written in the bones of ancient human remains. This is the skeleton of a 14-year-old girl who lived in London under Roman rule. The DNA in her bones showed she grew up in North Africa. She had blue eyes. Like many living in the city today she was of mixed race and her family had travelled across the globe to be in the capital.
Caroline McDonald (curator, Museum of London): Even though this was 2,000 years ago the world is still a large place. People are still able to move thousands of miles and we think she may have been part of a military community.
Pallab Ghosh: DNA was extracted from her teeth and bones and analysed by scientists in Durham and the U.S. The researchers found out about two more of the very first Londoners. Like the 14 year old girl one also had their roots in Africa and the other had Eastern European ancestry.
Michael Wood (historian): It's a boom town, as I call it, or a boom city...
Pallab Ghosh: As we walk along the ruins of the wall that the Romans built around their new city historian Michael Wood tells me although a lot has changed since then some things have stayed the same.
Michael Wood (historian): It's the most multicultural city in the world and what's great about this is you just get that little hint of today's London in the Roman past.
Pallab Ghosh: This box contains a human skeleton. There are 20,000 of them here, stretching back thousands of years. Researchers want to analyse as many of these as they can to find out where they came from, how they lived and how they died. Scientists hope to study the remains of thousands more Londoners to get new insights into the history of the capital through their stories. Pallab Ghosh, BBC News, London.

And Pallab Ghosh certainly couldn't be accused of understating his story's importance in a roughly contemporaneous tweet:

P.S. And we're being subjected to some very exciting breaking news; the BBC’s sensational discovery that London has always been multicultural.  Deep joy all round. Fiona Bruce is delighted.

And even some Guardian commenters spotted that the BBC's tone wasn't exactly 'impartial' in spirit:


Various points have been made about the BBC's coverage here, to which I'll add some more.

Alan at Biased BBC has pointed out several other news reports about previous DNA studies that showed that Roman, Viking and Norman invaders left next to no genetic imprint on the British people. Only the Anglo-Saxons did that, and their genetic legacy remains the overwhelming one.

Such evidence, of course, reflects what we already know (despite what we see in BBC drama programmes, from Merlin to Robin Hood to Doctor Who, of considerable ethnic diversity in Britain's past): that Britain, including London, wasn't multicultural (in the current sense of the word) throughout the 1,500-year period from the end of Roman Britain till the post-Second World War period.

And shouldn't anyone who knows anything about Roman Britain already know that the Roman occupation brought the Roman Empire's ethnically-diverse soldiers, their families and their slaves (which some of these four people might very well have been) to our shores, especially to its cities and military camps, until the occupation ended? (It's not a new fact that the African-born "Black Emperor" Septimus Severus died in York after several years of fighting north of Hadrian's Wall). So quite why Pallab Ghosh believes that this DNA evidence will "literally change history" is beyond me. 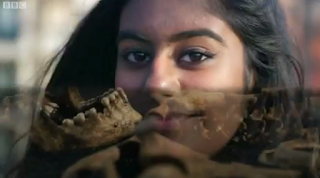 (Despite what Pallab Ghosh asserted about the "mixed race" 14-year-old girl, there's no evidence whatsoever that she came with "her family" or that, using the kind of emotive language we associate with the BBC's coverage of the migrant crisis, her and her family "had travelled across the globe to be in the capital". She could have been a slave. Young girls were kept as slaves in Roman Britain (as, sadly, some are again now in modern multicultural Britain)).

The point being that London may have been diverse/multicultural 'at the start' but not, as the BBC kept saying here, 'since the start', implying an unbroken run of multiculturalism:

"how London has been a multicultural society since the very beginning"; "London is known for being a culturally diverse city and now a DNA study's confirmed that that's been the case since Roman times"...

That's where the BBC has got this wrong. London has been 'diverse' at two points in its history - at it birth and in the present day. To say it's been multicultural "since the very beginning" is to imply that it's always been multicultural, whereas in fact - once the Roman occupation ended - it almost entirely stopped being multicultural for a very long time.

And to say it's been multicultural "since the very beginning" is also to apply a good deal of spin to the story (even if that particular spin is shared with some curators and historians).

The purpose of that spin can only be to make the idea of a multicultural London sound as if it's been the natural, default state of things in the city since the very start, and that multiculturalism is and always has been an essential part of what our nation's capital city is about.

Plus why use the loaded word "multicultural" at all about Roman London in the first place? 'Ethnic diversity' and 'multiculturalism' are not the same things, and the Roman Empire of Diocletian wasn't the GLC of Ken Livingstone.

Whatever the virtues of having a diverse and vibrant contemporary London (and there are plenty of upsides as well as downsides of course), I strongly object to having history distorted in this way by the BBC for what seems to be its own ideological (pro-mass immigration) ends.

If anyone can show that the BBC wasn't distorting history here, please let me know below.
Posted by Craig at 14:20