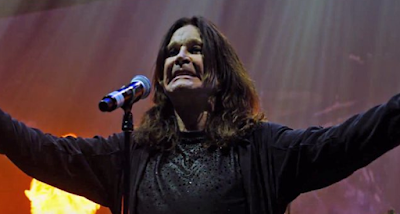 Oooh, a spot of mystery tonight, courtesy of our Samira...

So not David Coverdale or Ian Gillan then. (I love a quiz.)

So which hard rock band's lead singer will have his moaning email about Arron Banks being interviewed on #Marr read out - or, more properly put, 'platformed' - by Samira's Newswatch tonight?

If it's perennial loudmouth and Israel hater Roger Waters of Pink Floyd - last heard of being booed and cheered for 15 minutes in Brazil for slagging off the new president there - then I'm claiming a prize. But as he's still in South America (in Argentina at the moment I think) it surely can't be him (though I still wouldn't be surprised if it was him)?

So if it isn't Roger Waters, who can it be?

How exciting! Any ideas?

Jon Bon Jovi? Bruce Dickinson of Iron Maiden? Brian Johnson, formerly of AC/DC (please let it be him and let him sing his email in his magnificent trademark high-pitched, tight-trousered,  screeching and scratching style. God bless Brian Johnson!)? Or whoever used to be lead singer of Def Leppard? Or that guy, Mr Lordi, who dressed as a monster for Finland in the Eurovision Song Contest? The mighty Thor, of Thunder in the Tundra fame? (Am I the only British person who remembers that song? It was the early 80's and I had a cassette recorder and randomly recorded it, as you did back them, from Tommy Vance's late night Friday night Radio One rock show. And I've never forgot it).  Or Ozzy Osbourne?

I'm all on tenterhooks now.