Tales from the BBC edit suite 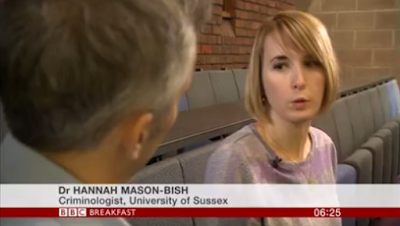 Readers of this blog, and ones like it, will probably appreciate a piece by Steerpike at The Spectator tonight.

It's headlined The BBC blames school attack on… Brexit.

He describes how "the BBC news channel ran a short piece on the increase of hate crime incidents against disabled children", with the BBC focusing in on "a school which catered for disabled children in Newcastle, which had recently been broken into and vandalised by thugs who destroyed toys and sprayed offensive graffiti on the school’s walls". According to Steerpike, "the BBC had a ready-made answer" for what caused this attack:

Instead of following the school footage with someone speaking about hatred towards those with disabilities or rising crime more generally, they instead chose to lead with an interview with criminologist Dr Hannah Mason-Bish. She went on to explain that the attack was actually down to the BBC’s favourite bogeyman… Brexit. She told them:

‘Unfortunately the EU referendum gave some people the opportunity to act out their prejudices in a much more open way.’

Exactly how this incident against a special needs school linked to the EU referendum was left unexplained by the BBC, as though viewers would simply understand that any crime must somehow be linked to the UK’s departure from the European Union.

But Mr S can perhaps fill in the blanks for viewers: from car sales to falling number of Today programme listeners, the BBC will always find a way to somehow blame Brexit.

As I saw a comment saying much the same at Biased BBC this morning, I had a look at this myself and found Dr Hannah on Twitter saying that she was now being "abused" and receiving "threats" after her appearance (hardly surprising but utterly disgraceful). She sounded distinctively fed-up:

I have no idea what I’m talking about! (Only researched hate crime for 15 years). I blamed Brexit! (I didn’t).

So there are two questions here: (1) Did she blame Brexit or not? and, (2) if she did, is the BBC to blame for 'giving her a platform' to say what she said?

The offending feature was a recurring report on BBC Breakfast and has subsequently been running, on and off, throughout the day on the BBC News Channel.

The report was by the BBC's Tim Muffett.

Steerpike's talk of the BBC 'leading with an interview' with Dr Hannah led me to expert a report followed by an interview, but it was just a snipped of an interview in a report from our Hannah. (He did call it a 'short piece' though, so that was my fault).

Unfortunately, the EU referendum gave some people the opportunity to act out their prejudices in a much more open way, and so we saw hate crime and hate incidents increase across all the different strands. We know that social media platforms, they encouraged comments and, unfortunately, some of those can be unpleasant, hate filled, prejudicial comments.

Well, I have to say that it does look from that as if Dr Hannah blamed Brexit.

But maybe it was the BBC's editing.

That's something that really shouldn't be discounted.

Yes, as her Twitter feed confirms, her views are very much what you'd expect of a left-wing feminist academic, but her contribution was very, very brief.

Maybe she said lots of other things that got left (and lost) on the edit suite floor and talk of Brexit was merely a tiny part of what she actually said but the one and only thing that the BBC picked up on and highlighted in its report.

(And, yes, Speerpike is correct to say that the BBC did absolutely nothing to counter her Brexit comments.)

That's far from far-fetched. After all, it's not the first time such a thing's happened. We've noted several people complaining about how they've been edited and misrepresented by the BBC.

(If you're interested, there's a particularly good example of such a thing happening here from my old 2009-10 blog - and please look out for the comment from Prof. Alan Smithers, victim of the BBC's editing, below the post.)

The alternative to this is that that's pretty much all Hannah Mason-Bish said and that she's not a wise expert.

If so though, is the BBC really to blame for inviting an expert in the field of hate crimes against disabled children to say something, even if she says something many will consider silly and downright inflammatory (connecting Brexit with an attack on a disabled school)?

It really does depend on the editing, doesn't it?

Not entirely though. Regardless of the editing, her apparent claim that the Brexit referendum has resulted in increased abusive behaviour towards disabled children and, via the report's linkage, the implication that the abhorrent attack on that Newcastle school for disabled children came about somehow because of Brexit, ought to have had a strong caveat ('health warning') sounded from either the BBC reporter during his report or from the BBC presenters following the report - but no such caveats ('health warning') came.

And this report has been running throughout the day on the BBC News Channel, with no caveats added. (First appearance, according to TV Eyes, at 6.25 am, five times thereafter, most recently at 4.46 pm).

Curiously, during the early stages of writing this post I felt that Steerpike was being unfair to the BBC and was about to debunk him, but having now seen the report and how it was framed and read Dr Hannah's tweets and started questioning the BBC's editing and followed the coverage throughout the day, I'm more and more convinced that he's spot-on and that we might have yet another prime exhibit here as regards BBC bias.
Posted by Craig at 20:41