Did Jim accost her? Well, the female White House intern tried to take the mic off the CNN reporter and he refused to let her take it, making contact with her arm and saying 'Pardon me, ma'am' as he did so. She then sat down and waited and then took it off him and handed it to the next journalist. White House Press Secretary Sarah Sanders is saying that Jim Acosta laid hands on the young woman. Jim Acosta says that's a lie. The White House and its supporters are putting out a short video showing....in....slow....motion....orspeedingup...or ZOOMING IN...the moment when the CNN man's hand touched the WH woman's arm, making it look much worse than it was. Meanwhile, media outlets like the BBC are posting photos to illustrate the situation that are just as questionable, especially this one which makes it looks as if the intern is the aggressor with a pointing, angry President Trump behind her and the CNN reporter seems to be to lean back under the pressure of the bullying attack - which is highly misleading too: 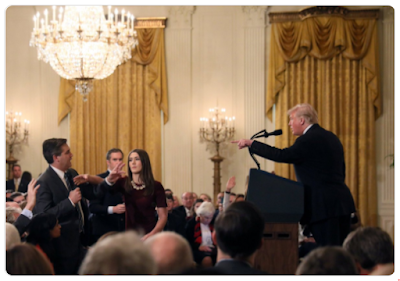 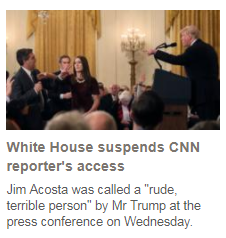 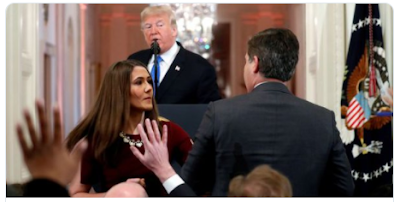 and the first image you say on their main website report on the story is a video frozen at this point - the point where Mr. Acosta's hand makes contacts with the intern's arm: So the BBC is making use of a camera shot that 'gives one side of the story', and, frankly, it makes them look very partisan.
Posted by Craig at 08:49