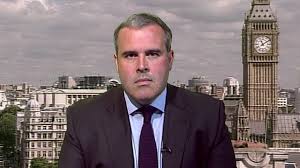 I haven't heard that Matthew Correspondent's bit yet (though I heard him asking Andrew Mitchell about the government's use of language during the big 8.10 interview, getting Mr Mitchell to distance himself from such pleb-like language)...

...but surely even Matthew Correspondent would be hard pressed to beat his colleague Robin Brant's contribution to today's Today programme (at around 6.40 am):

James Naughtie: On the other side of the argument, I see the chief executive of Refugee Action, a charity supporting refugees, Stephen Hale, as saying that there's too much conflation of people seeking asylum and people who are genuinely economic migrants. And he says the top three countries that people seeking asylum come here are Eritrea, Sudan and Syria and it's abundantly clear that they're fleeing because of war and persecution.

Robin Brant: Yes, he's attacked what he calls "the very strong government narrative" which he think adds to a sense of confusion, as you said. And if we look to the comments from Philip Hammond, the Foreign Secretary, which is the other key element in what's going on today...he's out in Singapore...but he's talked overnight in a BBC interview about "the chaos in Calais", "marauding African migrants", and he's said how he doesn't think the EU can sustain its present level of standard of living if tens of thousands of those so-called "marauding migrants" are let into the European Union. And that kind of language comes on top of some of the controversial words we've seen from the Prime Minister...he's talked about "swarms" of people seeking to come here...for a better life yes but, nonetheless, using language that some people think isn't very helpful at all.

And from that, it sounded very much to me as if Robin Brand is one of those "some people".

Robin, if you recall, was the BBC's "controversial" UKIP election reporter. His use of language did not go down very well with many UKIP supporters. A lot of them thought his language about their party wasn't very helpful at all.
Posted by Craig at 18:49