"a particular viewpoint on life" 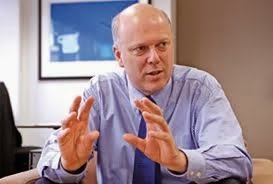 Conservative Justice Secretary Chris Grayling has been quoted in some of the newspapers today for his criticism of the BBC.

Some of the coverage make it sound as if he savaged the BBC - which he didn't; in fact, he was rather charitable towards the corporation. (Rather too charitable I'd say.)

This then is what Mr Grayling actually said:

I think the real problem for the BBC is not that there is an intentional bias at senior levels, not that it is institutionally biased against us. But it’s that there is a cultural leaning towards the Left. The people who work at the BBC have a particular viewpoint on life more often than not. It’s something that people like Martin Lewis have identified. And so it makes it much more of a challenge for people at the top who I genuinely believe want to be impartial in the way they present issues. But they are dealing with a cultural challenge which isn’t easily solved. It’s something they really do need to work on. The BBC is generally very good, but there are moments when it really does things in ways that you think ‘this is just not right and proper for a public broadcaster who’s trying to present a dispassionate view on life’.

They’ve been on the wrong side, they’ve been unbalanced in the debate over the years about immigration, about Europe. And I think they’ve wised up to that. But there is still a cultural view within the BBC, not just within current affairs. To some extent it’s less with current affairs than within general entertainment, the throwaway lines in a drama which still suggest that actually the BBC’s got some way to go before it really to my mind fulfils the role it has to be a genuinely dispassionate public service broadcaster. I think there’s still an inclination to cover issues in a way that is very much about the culture of a slightly Left-leaning, metropolitan group of people who are disproportionately represented there. That said, the BBC is a great institution and I wouldn’t want to tear it up. But I think it’s still got some work to do.