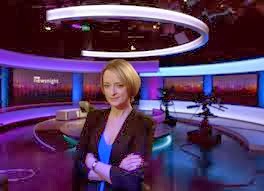 It's also time for Is the BBC biased?'s now-regular listing of all the stories covered over the course of the week by BBC Two's Newsnight.

Here's what they chose to report this week:


Wednesday 19/2:
1. The Ukrainian protests. Interview with Ukrainian vice prime minister Kostyantyn Gryshchenko.
2. "How Tony Blair offered Rebekah Brooks and Rupert Murdoch a shoulder to cry on" - the phone hacking trial. Interview with Steve Hewlett of the Guardian.
3. Are fixed-term parliaments a good or bad thing? Interview with Sir Gus O'Donnell.
4. Actor Alan Alda explains why he's hunting for a scientist to explain what colour is in terms that a child could understand. Interview with Alan Alda.
5. Why the American campus has become a place of sexual danger for many young women.
6. Facebook buys a mobile phone instant messaging app. Interview with Mike Butcher, editor of TechCrunch.com.


Friday 21/2:
1. The Ukrainian protests. Interview with Ukrainian ambassador to the U.S., Yuriy Sergeyev, and opposition spokesman Oleh Rybachuk.
2. The Archbishop of Canterbury attacks the government over its benefit cuts. A report featuring claimant Terry Moore, who has been sanctioned (he says unfairly) and is suffering as a result. Interview with Steve Baker MP (Con) and Sarah Teather MP (Lib Dem).
3. Branding - is the internet making big brands irrelevant? Interview with author Emanuel Rosen, author of 'Absolute Value', and Rita Clifton, chairman of BrandCap.
Posted by Craig at 12:34