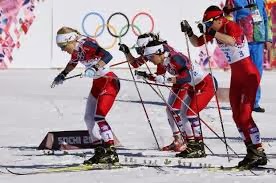 What's the most inevitable thing in the world?

It begins with the likelihood, in light of the opening of the Winter Olympics in Vlad's Russia, that Radio 4's Sunday would do a feature related to the games tomorrow. (And the programme's website indeed confirms this will happen.)

I bet you can. It's inevitable after all. Go on, give it a try!

Is it something sport-related? No.

Is it something to do with the involvement of Russian Orthodox priests in Sochi? No.

Is it something about how Russia's Jews are doing something good in connection with the Sochi games? Certainly not.

Is is something to do with corruption then? No.

Something about Pussy Riot? Well, that was a possibility, but...No.

Is it Henry, the mild-manner janitor? No.

So what is it?

Well, given that the BBC has been banging on about little else with regards to Russia for months now - and not even Putin's support for Assad in Syria has trumped it -  you should have worked it out by now. I don't want to sound stern, but you really should.

Yes, it's Putin's new law on homosexuality of course:

Sochi Olympics and the extent to which Putin's new law on homosexuality reflects the views of church and people. Anastasia Uspenskaya reports from Sochi.

And I fully expect that the views of the (Russian) church and people will be weighed in the balance and found wanting...

...not that there's likely to be much balance for them to be weighed in.

Actually, come to think about it, there is something that's even more inevitable than that, and that's me moaning about it tomorrow.
Posted by Craig at 20:15