The BBC bods at The Big Questions decided not to show a close-up of the 'Jesus and Mo' T-shirts, worn by members of their audience, for fear of offending Muslims.

Maajid Nawaz, one of the programme's other guests, then tweeted a picture of one of the T-shirts in protest at what he saw as the BBC's craven censorship - and received death threats for his trouble.

Newsnight (like Channel 4 News) then discussed the controversy and decided not to show the cartoon image of Mo, thus compounding the original offence caused to supporters of free speech.

Next up, Newswatch tackled the subject, noting more complaints at the BBC's cowardly-seeming refusal to show the cartoon image of Mo. And yet Newswatch itself opted not to show the image of Mo either!!

All this is surely the kind of thing that satire was made for.

Here's some lovely Islamic art to end with, all depicting a certain person - and it ain't Jesus. 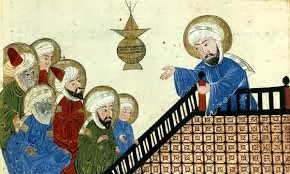 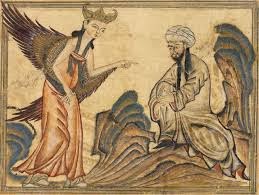 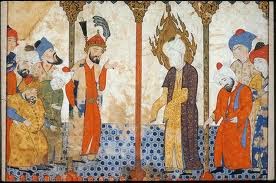 Update: Janice Turner has written an interesting piece for The Times (£):

It was hard to watch Wednesday’s Newsnight without concluding that Britain has become a very strange place. We saw an artist so frightened for his life that his face and even his voice were disguised. We saw his hand sketching the Christian prophet in a crown of thorns, but forbidden to draw the Muslim one. An 11-minute film debated a drawing at the heart of a national controversy but at no point could we see it.

From this article, we get Newsnight editor Ian Katz's defence of his decision not to show Mo's image:

When challenged, Newsnight’s editor, Ian Katz, said that there was “no clear journalistic case to use” the cartoon, and that “describing” it was sufficient. (TV news will get a whole lot cheaper if we needn’t send a camera crew to war-ravaged Damascus: let’s just have it described by Jeremy Bowen.) Any depiction of Muhammad, Katz argued, “causes great offence to many, not just extremists” and to run it would be “journalistic machismo”.

Janice Turner makes what to me seems the main charge against the BBC (and Channel 4) here:

Mr Nawaz’s frustration is understandable. In banning the image, the BBC cast him as the faux-Muslim, his opponents as the rational, majority voice that must be heeded.

How can moderate Muslims be expected to speak out, if they are cast as apostates by national TV? Those who have not yet made up their minds will see angry offence as the default position. They hear it proclaimed by the deceptively reasonable Mohammed Shafiq, the Lib Dem, whose Ramadhan Foundation hosts homophobic speakers, and that hot-air balloon Mo Ansar, who argues that gender-divided public meetings are just like BBQs where guys cluster around the grill while wives chat with the kids. No biggie.

The title of her article? Show us Jesus & Mo. It’s the price of freedom 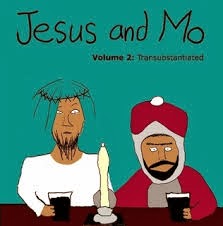